Filtered untempered cocoa butter and properly tempered cocoa butter was poured into a shallow mold closing and maintained in thermostats at temperatures 18, 23, 27 and 29,5 ° C, preventing any movement. After the sample was kept at such temperatures three months storage all samples was continued at a temperature 18 ° C. At regular intervals, using capillary tubes defined "complete melting point", which is plotted. 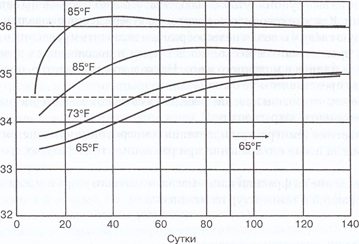 Fig. 20.2. The melting point of cocoa butter untempered after storage

A certain amount of cocoa butter, which was used for this experiment, was mixed with carbon black and then tempered and untempered samples were placed in the same conditions as those in which the pigment is added.

After one hour on the surface of all samples untempered white specks were visible, and the expiration date of which the first three months were maintained at different temperatures, and the next three months - 18 ° C temperature, the samples acquired a different appearance.

A number of gray-haired plaque with tempered samples stored at 27 and 29,5 ° C, which was possible to remove a layer of fat, is on the surface beneath them, they gathered in a capillary tube and defined melting temperature. The results were the floorcheny following:

For can take the true melting point temperature 34,5 ° C, very close to the melting temperature stable p-forms of cocoa butter.

Note that tempered cocoa butter, which was stored at a temperature 18,3 ° C, and did not reach the melting temperature 34,5 ° C, and the samples after storage for seven months and the white residue was not formed.

separate experiment was conducted in which used a) pure cocoa butter and b) such as cocoa butter, to which was added 12% milk fat (consisting of chocolate - 4%). Samples, as in the previous case were tempered and stored at 27 ° C. The melting point was determined at intervals of up to seven months, and the data plotted (Fig. 20.3).

This kind of experiment shows what can happen with chocolate (tempered, poorly tempered, or with the addition of milk fat) stored at temperatures ranging from "moderate" to "tropical"And gives some idea of ​​how much time at a certain temperature storage may 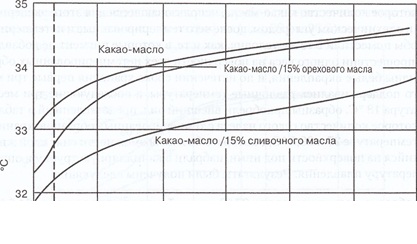 
Jette formed graying of chocolate, as well as that for a period of unstable forms of cocoa butter are moving in the stable.

But this one can not explain the way to the surface resistant . (3-form Assume that chocolate was bad tempered and rapidly cooled, then in its constituent cocoa butter a significant amount of unstable forms (a and p'), which will be present in the hardened chocolate immediately after it hardens.

When such chocolate is stored under environmental conditions, the transition of these unstable forms to stable ones will gradually occur, and stable crystals are formed throughout the chocolate mass. This in itself does not explain the graying, which is influenced by another factor. According to the dilatometer and adiabatic calorimeter indices, it can be learned that at ambient temperature, cocoa butter contains some fraction of liquid fat, and with increasing temperature, the proportion of the liquid phase increases and fat (or chocolate) becomes more mild. The fraction of the liquid phase depends on what happened with cocoa butter (or chocolate) earlier. Cocoa butter (or chocolate), frozen as a result of cooling, which is produced in an industrial cooler (with the chocolate passed normal tempering) may contain 20% of the liquid phase, and after several hours of storage at a temperature of 18 This ° C the proportion drops to 15%. It is established that about 25% cocoa butter, and then may be unstable state (or R). These parameters, of course, vary considerably depending on the tempering and cooling technologies.

If we take for example the above data, it turns out that even 25% cocoa butter should go in a stable form, and more 15% oil of this amount has to be cured.

One can assume that during the period when a transition occurs in the form of volatile and stable solidification of the liquid phase, cocoa butter, or in particular, chocolate can be considered semi-mobile crystal lattice within which over time there is crystallization of cocoa butter.

If the temperature rises during storage, for example to 24-27 ° C, the liquid phase content increases. Consequently, this fat in the lattice becomes more mobile and stable forming p-crystals will grow outward form between the surface particles of cocoa butter, sugar and cocoa particles, as well as within the chocolate.

At lower temperatures, storage of mobility within the crystal lattice is small, so outside the crystals will not germinate, or, in extreme cases, their growth will be limited.

Consequently, in order to prevent or to delay hair graying is necessary to prevent the growth of large crystals of p-stable form, and it needs to ensure that the largest possible amount of cocoa butter was transferred into a stable form during the cooling and tempering. In a case where rapidly grow small p-crystals, the growth of large, slow-growing p-crystals is avoided.

The question is how lHer way, milk fat prevents graying? This phenomenon can not be explained only by an increase in the proportion of liquid fat, since other liquid fats contribute to graying, without interfering with the slow growth of stable large cocoa butter crystals (P-form). And if such crystallization continues, the liquid fat will increase the amount of liquid phase, and consequently, the mobility of the crystal lattice, as a result of which large p-crystals will be easier to surface. This was confirmed by the experiment with inclusion of hazelnut oil; It was also found that, unlike milk fat, it does not help to keep the melting point at a lower level.

Based on the experimental results, in which the melting point was measured, it can be assumed that milk fat delays or prevents the normal p-cocoa butter forms crystals. According to the author's work, Prevents large p-cristallov.

Separation into fractions of cocoa butter, illipe butter and butterfat. Samples of these three fats were given in a liquid state at a temperature of 45 ° C, filtered and then stored in a completely stationary at these temperatures, ° C: 35, 29,4, 26,7, 22,8, 15,6. One of the samples was stored at a temperature range from up to 15,6 10 ° C.

Crystallization is slower, and at each temperature storage of fat carefully removed crystals that had been done until then, until no longer be visible crystallizationI. The number of samples taken is not taken into account; five fractions (for illipe oil - 4) was obtained, which was determined by the melting temperature.

In 35 ° C from the cocoa butter crystals could not be extracted from illipe butter 3% was recovered, and milk fat - 12%.

These figures show just how diverse these three crystalline forms of fat, and how much may be different melting temperatures of the various fractions.

Since illipe oil, albeit in small amounts, is contained fraction having a very high melting temperature, the tempering of chocolate, which is included in the composition of the fat must be carried out at higher temperatures. It is obvious that if this type of chocolate is not properly temperedm and cooled at low temperatures, the presence of such fractions with higher melting chocolate will bloom, if a significant number of them are still in an unstable condition, since they would be during storage of the fall gradually crystallized. In fractions of milk fat melting temperature range is so wide that it can be concluded that some of its fractions will affect

It is known that the use of toppings, containing fats or oils with a low melting point (with the exception of milk fat) contributes to the occurrence of blooming on chocolate products produced via enrobing, but molded molding chocolates of this problem does not exist, except for the cases when the layer chocolate too thin (which may typically occur due to the defect molds).

Apparently, in the cracks formed in the chocolate, the fat leaks from the filling, in addition, the conditions for greater mobility of unstable liquid fractions, passing into the stable p-form.

Defective chocolate. It is about having the appearance defects of chocolate products, as well as irregularly shaped products, it is suitable for food. This chocolate is sold to employees of the enterprise, or go to the store discounted products.

In this chocolate when it is often closer examination revealed fat bloom, is located on the underside of the product or patches on the surface.

In this example, another cause of fatty gray is clearly visible; Perhaps these observations also support the theory that an intact chocolate surface prevents graying. On the surface of the confectionery, covered with chocolate glaze, there may be fingerprints or scratches, and it can be broken in cases when the products were removed from the conveyor of the coating machine before they finally solidified. Sedation of the damaged surface occurs some time after storage at those temperatures, which, as was shown earlier, contribute to graying.

It is interesting to note that scratched or chipped portions of the surface of the molded chocolate also appears graying; it can be assumed that the stable p-form in the process of crystallization might grow on the surface in a damaged surface.

Graying of milk chocolate. publications, povyashtennyh bloom milk chocolate, there is practically no; perhaps it is related with the idea that because of the contained natural milk fat bloom is not affected by this chocolate. This is incorrect, as graying of chocolate milk can also occur if the products are stored for a long period at a temperature of about 18 ° C at which graying starts depends on the content of milk fat. Graying appears after 6 from 9 months before., - The conditions of storage products in the stores and warehouses often coincide with those described above, although the chocolate does not usually have to be stored for such a long period.

When stored at warm temperatures graying chocolate milk also does not occur, but in chocolate, a long time stored at a temperature of about 18 ° C bloom stains may appear on the bottom of surface friction or at places where the fingerprints remained.

Graying of chocolate milk can be avoided by heat treatment.