From the sorting table, bread products are sent to tray or bezlotkovye containers. For tray containers, three- or four-flanged trays with trellised (for rye, rye-wheat, tin and bottom varieties) or solid (for long loafs, buns, baking) bottom are used. Currently widely used plastic trays, which are quite light and are well sanitized. 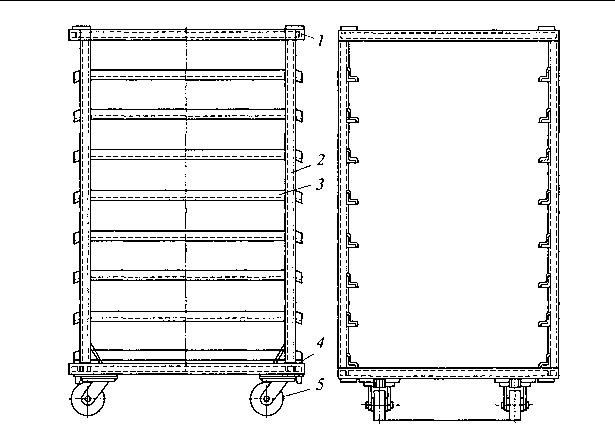 A container (fig. 3.51) is intended for transportation and temporary storage of bread in trays, which consists of a frame that has an upper 1 and a lower 4 frame, 3 guides, vertical 2 racks, and four 5 wheels. The brackets for attaching the wheels to the bottom frame rotate freely around a vertical axis. On this frame there are two copiers for centering and fixing the container on the trolley.

Containers with 18 inclined inward by three-sided trays, which are promising for mechanized styling of bread products, have become widespread.

The number of containers for storage and delivery of bakery products is determined by the formula:

For mechanized laying of bread products, a baking unit (Fig. 3.52) is used, intended for laying bread in trays and placing the latter in a container.

The design of the unit includes two chain shelf elevators (elevator) - receiving 3 and feeding 7, between 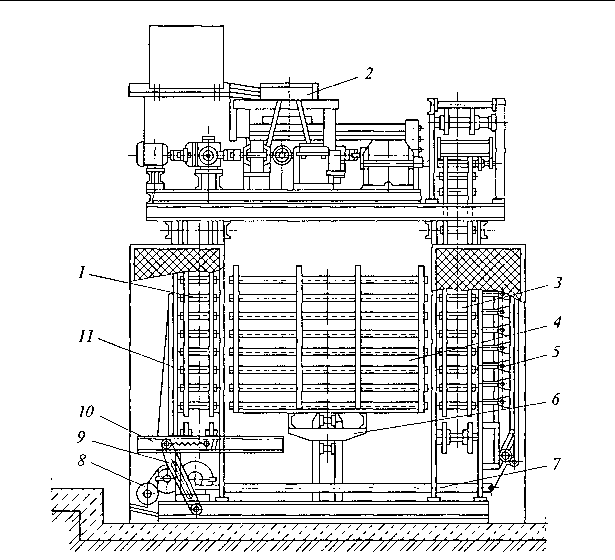 The mechanism for feeding trays is designed to additionally move the trays to the shelves of the receiving elevator in order to create a gap between them and the trays remaining on the container. This is necessary for the subsequent vertical movement of trays located on the lift. The mechanism is a double rod with levers according to the number of trays being moved, at the ends of which there are grips with springs. The rod is pivotally connected with a two-arm lever connected with a mechanism for the horizontal movement of the trays on the container.

The pan breading mechanism (fig. 3.53, a) consists of the 1 conveyor, 2 fixed descent, 3 feeder, 4 stop with sensor, 5 side and back 6 walls and a pair of 7 wings, forming a rectangle with dimensions corresponding to the internal dimensions of the standard tray.

Pre-oriented loaves of bread are transported by conveyor to the descent against the stop with the sensor. The sensor provides an electrical signal to turn on the feeder, making a reciprocating motion. Feeder in pairs pushes loaves on closed doors. After the feeder makes a specified number of strokes, the flaps diverge and the loaves are fed into the tray. For 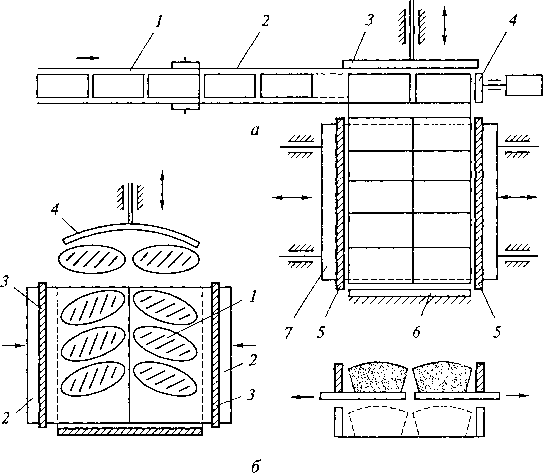 reducing the height of the fall tray pre-rises somewhat. After loading the tray is lowered and moved to the feeder lift.

The mechanism for laying the loaves differs from the previous one in that the side walls are made movable (fig. 3.53, b). The length of the loaves is significantly longer than the length of pan bread, and their sizes vary widely (up to 40 mm in length and 20 mm in width). This does not allow placing the loaves in the tray in parallel rows. The most dense packing with preserving the integrity of the outer crust is achieved when the herringbone is located.

The pre-oriented 7 long loafs are conveyed to the feeder, the 4 pusher of which has a concave profile and a fixed slip-over. The side walls of the stacking mechanism are spread apart by an amount sufficient for the free passage of two loaves of the greatest length. The pusher, moving the loaves on the closed 2 doors, simultaneously turns them through a small angle. When five pairs of loaves accumulate on the 2 flaps, the side walls of the 3 converge, simultaneously turning the loaves, and place them in the herringbone. After that, the valves open and the loaves are stacked in the tray. Then it is lowered, and an empty tray is installed in its place by the movement mechanism.

For stacking bread products in bezlotkovye containers serves as a unit for stacking hearth bread (Fig. 3.54), which are functionally related mechanisms: feeder 7, distribution conveyor 2 and drive 7. The feeder is made in the form of a belt conveyor with the 16 mechanism for counting the loaves and the 17 chain transporter mounted above it. All feeder mechanisms are mounted on a common 14 frame. Depending on the bread feeding scheme from the oven and the location of the devices in the bread storage, the 15 conveyor belt conveyor can be either left or right.

The 2 distribution conveyor consists of inclined and horizontal sections connected by a chain drive and having a common drive. The distribution conveyor is moved in a vertical plane by an 5 lifting mechanism mounted on an 7 drive. The lower part of the inclined section of the conveyor with the help of rollers 13 freely moves along the guides mounted on the frame of the feeder 14. On the horizontal section of the conveyor, there is a mechanism for counting rows of 4 bread.

The 7 drive consists of 8 shelves with 5 driven and non-driven 18 rollers and is equipped with a mechanism for pushing 8 bread. The mechanism has 9 pushers (according to the number of shelves) and moves on the 11 trolley along the guides. All mechanisms are mounted on the 12 welded frame. 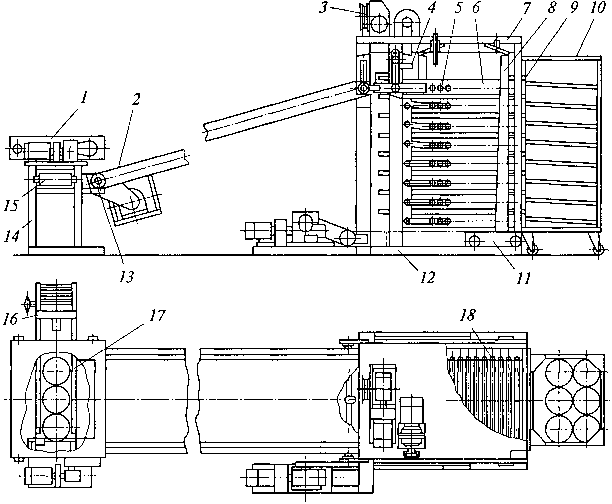 Unit for laying bread in bezlotkovye containers works as follows. Hearth bread from the oven enters the 15 belt conveyor, the belt speed of which must be higher than the speed of the conveyor belt. This achieves single-piece transportation of bread to the 16 counting mechanism. After supplying the required number of loaves, for example, three, the 17 transporter transplants the formed row from the conveyor belt of the 7 feeder to the belt of the inclined section of the 2 distribution conveyor. The row of loaves is sent to the horizontal section of the conveyor to the 4 rows' counting mechanism, and then transferred to the drive 5 drive rollers, which is pushed onto the 18 non-drive rollers. With the accumulation of the required number of rows (for example, three), the 2 distribution conveyor moves by a step equal to the distance between the 6 shelves. The loading cycle is repeated until all the storage shelves are full.

The mechanism of pushing 8 with the accumulation of bread in the drive is in an intermediate position relative to the edges of the shelves. As soon as the drive is filled with bread, the 8 pushing mechanism moves into the 5 drive roller area and, by reversing, the 9 pushers simultaneously move accumulated bread from all shelves to the shelves of the 10 container. In this case, the accumulation of bread on the shelves of the drive does not stop. The filled container is rolled back, and an empty one is installed in its place. The cycle repeats. The drives of the unit operate in an automatic mode according to a given program.

To account for the number of finished products in mechanized bakeries, each baking unit is equipped with a counter, on which the number of filled containers is recorded by pulsing.

Free cooling is the cheapest way, but it differs in duration (90 ... 150 min) and requires considerable production space.

When cooled, there is a loss of mass of products from drying out. Mass transfer and colloid processes occurring during the storage of bread and bread products cause a decrease in their quality indicators (staling).

When using conditioned air, the cooling time is shortened. The air supply from the air conditioners takes place according to the recirculation scheme - the hot air that is taken in the upper cooling zone is moistened and cooled in the air conditioner, and then returned to the cooler. Since hot bread loses moisture more intensively than chilled, the air supplied to the cooler first flows through the zone of the most chilled bread or is supplied in two parallel streams to the hot bread zone and to the low temperature bread zone. This improves the intensity of cooling and decreases the shrinkage of the bread.

The optimal parameters of the air environment for cooling bread products are the temperature 15 ... 18 ° С and relative humidity 90..95%.

The most economical way to preserve the freshness of bread is the device of air-conditioned chambers for accommodating trolleys with bread. The closed air-conditioned room is designed to preserve consumer properties of bread products, reduce shrinkage, as well as to create a normal rhythm of receipt of products in the distribution network.

Vacuum cooling is based on a sharp decrease in the boiling point of water with an appropriate vacuum. The cooling time is reduced to 10 ... 15 min. The rate of cooling of hot bread is especially high in the initial period of vacuuming, after the temperature of the crumb 30 ° C is reached, it decreases. With this method, shrinkage is increased in 1,5 ...

If the products are packaged hot, moisture accumulates inside the package, which leads to wetting of the peel and loss of the presentation of bread products.

The packaging of completely cold bread, which has already lost a significant amount of moisture in the process of cooling (drying), is also impractical, since in such bread the rate of stagnation increases noticeably.

For products made of rye and rye-wheat flour weighing 0,7 kg the optimum aging time before packaging is

90 .. 120 min for pan bread and 80 ... 100 min for baked goods; The optimal time for cooling bakery products with a mass of 0,3..0,5 is 60..70 min. Since the small-piece bakery and butter products have a small mass (0,05 ... 0,2 kg), they cool down quite quickly - during 25 ... 40 minutes after leaving the oven. Therefore, it is not always possible to organize the packaging of such products in optimal time. In this regard, it is advisable to use special small chambers for cooling and holding small-piece and rich products before packaging, or to cover trays with small-piece products with a polymer film.

Nowadays, cooling of bread and bread products with the help of conveyor coolers equipped with air conditioning systems and supply and exhaust ventilation is widely used. In these constructions, cradles are used to move the bread, mounted on a chain conveyor, or transporting bodies in the form of a flexible rod conveyor.

One of the effective ways to preserve the freshness and quality of products for a long time is their freezing. For freezing and storage of products at bakeries, refrigerating chambers are equipped, where products placed in trays are delivered on trolleys. Freezing and storage of products are carried out at temperatures from -18 to -23 ° C. At this temperature, the freshness of the bread is completely preserved. The defrosting of bread products is done in baking ovens or in a bakery at normal ambient temperatures. Freezing bread products is associated with significant capital expenditures and is characterized by significant energy intensity.