For the mechanization of the production of pastry and simple crackers, special machines are used for the molding and cutting of crackers.

For the mechanization of other production operations, the equipment used for the production of bread products is used, namely: conveyor cabinets for final proofing of the breadcrumbs and curing them after baking; for baking sukhar plates and drying crackers - conveyor lyulechno-poykovye or tunnel ovens with a ribbon hearth.

Movement from the electric motor through the speed variator and chain transmission is transmitted to the shaft of the grooved roll. Movement to the second roll is transmitted through a pair of spur gears on the opposite side.

In the machine, three types of matrix can be used: with three holes - in the production of crackers for road, Kiev, cream and vanilla crackers; with four holes - for coffee and pioneer crackers and with nine holes - for children. The width of the holes can be adjusted with shutters with 4 screws.

The dough is fed into the receiving hopper, with the knurled rollers fed into the chamber and pressed out through the matrix onto the sheets moving on a conveyor belt. As the sheet is filled, the dough pieces are manually cut with a metal scraper and transferred to the proofing.

The machine for additional forming of dough pieces of rusks with the subsequent layout of the slices and laying them in rows (Fig. 3.41) provides a more thorough study of the mass of 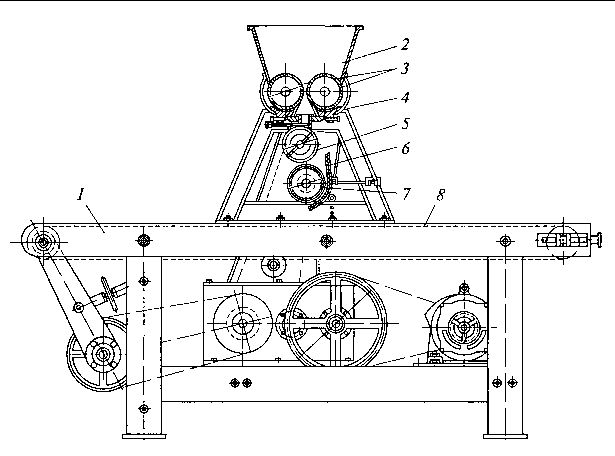 cakes, which contributes to obtaining uniform and thin-walled porosity of crackers with high quality indicators.

The machine consists of an 1 bed, an 2 receiving funnel, two 3 grooved rolls, an 4 matrix with interchangeable liners, an 5 cutter, an 6 apron, an 7 apron for rolling seams and an 8 conveyor belt.

The movement from the electric motor through the V-belt transmission, gearbox, V-belt speed variator and chain transmission is transmitted to the intermediate shaft of the conveyor, then to the slam-shut, and from it to the rolling drum. Drive corrugated rolls through cylindrical gears.

The matrix is ​​equipped with curtains with screws, allowing to change the cross section of the holes and thereby regulate the mass of the slices.

The 5 cutter consists of two discs mounted on a roller, between which two steel strings are strung against each other. The cutter makes 86 revolutions per minute. Mass of 12 slices ... 30

The apron and drum for seaming the slices are covered with vinyl plastic, which eliminates sticking of the dough to the surface during seaming.

The 8 belt conveyor has drive and tension drums. The movement of the conveyor is coordinated with the work of the cutter.

The dough from the 2 receiving funnel is made of 3 corrugated rollers into the compression chamber, pressed through the holes in the matrix, cut off by the fast-rotating cutter strings and thrown into the gap between the drum and the apron, where it rolls into flagella, which lie in even rows on the sheet moved by the conveyor. The rows of slices on the sheet are manually trimmed to shape the slab.

Machines for cutting rusk plates. In the production of rusks, several types of machines are used to cut rusks (bread slicers), differing in the nature of movement, the type and number of knives, the method of feeding semi-finished products, the structure of the working cycle. The quality of the cut surface, the amount of waste in the form of crumbs and deformed slices depend on the correct choice of the design of the cutting machine and the state of its working bodies. By the nature of the movement of the cutting body, all designs of bread cutting machines can be classified as follows: machines with rotational (planetary), translational and reciprocating movement of knives. For each of these groups is characterized by the use of a certain type of knives: disk and sickle, plate, tape.

In bread-cutting machines with the rotational movement of knives (disc and sickle-shaped), the cutting of a loaf or rusk plate is carried out sequentially - one slice. These machines are spread in production lines of low productivity.

In bread cutting machines with a progressive movement of knives, one or several ribbon knives are used.

In bread cutting machines with reciprocating knives, the cutting process is carried out simultaneously by a knife system, which ensures high performance of these machines. These cutting machines are used in many bakeries. The working body of the group of machines under consideration is carried out in the form of one or several rectangular frames with bladed blades stretched on them. Therefore, this group of machines are called frame type machines.

In fig. 3.42 depicts a kinematic diagram of a frame-type bread-cutting machine designed for cutting wheat bread crumbs into chunks with the production of creamy, Kiev, pioneer, vanilla, road and children's crackers. The machine consists of a 1 drive with an 6 electric motor, an 5 feed, an 2 retract and a 4 pressure conveyor belt, and 3 knife frames.

The drive box is installed on the machine plate and includes a molded body, a crankshaft and two plungers.

Conveyor belts are mounted on the sides of the machine. They consist of drive and tension drums and deflecting rollers. Tension drums, self-centering with tilting rollers, center the ribbons as they move. The upper, presser, conveyor is mounted on two vertical screws along which it can move in a vertical plane. The vertical movement of the conveyor is carried out manually with the help of a handwheel by means of a helical gear. 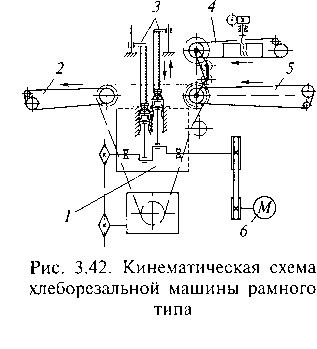 Figure 3.42. The kinematic scheme of the bread machine frame type.

The knife frame is a welded rectangular structure consisting of the upper and lower bars and two racks. In the slats with a certain pitch grooves in which knives are installed are made. Knives are tensioned by means of hangers, threaded through the holes in the upper bar and interacting with spring-loaded nuts.

The knife frames are fastened in cassettes, which are a rectangular structure consisting of the lower and upper traverse, interconnected by two ties. In the lower part of the cassette is attached to the plunger of the drive box, and in the upper part is fixed on two guides, along which it moves in the process.

The machine installs two cassettes and, accordingly, two knife frames. In each frame lamellar knives are placed in such a way that the knives of one frame are between the knives of the other.

Knife frames and belt conveyors of the machine are driven from the electric motor through the V-belt transmission and the drive box, worm gear, chain and gear transmissions.

To fix the rusk plates in the cutting zone, upper and lower combs are installed. The upper comb is rigidly attached to the upper, pressure, conveyor and with it can change the position in height.

When the machine is running, the breadboard plates are laid on the feeding conveyor and are fed to the knives, making reciprocating movement in the vertical plane. The cut chunks are removed from the cutting zone by the discharge conveyor. The necessary effort to feed the breadcrumbs to the knives is provided by the upper, clamping, conveyor, which presses them against the branch of the feeding conveyor.

When operating frame-type machines, it is necessary to carefully monitor the tension of the blade knives. The weakening of the tension leads to a wavy or oblique cut, an increase in friction losses in the guides. Excessive tension causes significant deformation of the crossmembers of the frames and in some cases leads to rupture of the knives.

High cut quality is obtained when using knives 0,4 ... 0,5 mm thick. However, this reduces their stability, which is the cause of the appearance of a wavy cut. The increase in tension in this case is unacceptable, since the static load on the frame crossbars reaches significant values. Good results when installing thin knives are given by their eccentric tension, providing increased stability of the cutting edge.

As the blades become blunt, cutting forces increase, the quality of the cut deteriorates and the number of crumbs and deformed slices increases. The durability of knives depends on the physicochemical properties of the material, the quality of preparation of the blades and their geometry, conditions and cutting conditions. For the manufacture of knives recommended steel grades U8-U10, 65G, 85HF.

Productivity Ph bread-cutting machine frame type can be determined by the formula:

where k - coefficient taking into account the slippage of rusks or loaves in the feeder (k = 0,9 ... 0,95); v is the speed of the feed conveyor; m is the mass of one dried breadboard or loaf; L is the width of the plate or loaf.

Equipment for drying rusk plates. For drying buns, conveyor dead-end or tunnel ovens with a ribbon hearth are used, commonly used in the baking industry for baking bread products. These ovens are included in production lines for the production of rusks, equipped with devices for mechanized loading of sheets with slices laid on them into the oven and ventilation of the baking chamber to remove moisture.

For drying bread crumbs in the baking industry, special drying units (dryers) of tunnel or dead-end type have been used.

In fig. 3.43 is a dead-end double-chamber dryer that is used for drying crackers made from rye and wheat bread, loaves and other bread products.

The dryer consists of 1 metal fencing of panel type with insulation, two 2 axial electric fans with 3 heaters and ten 4 moving flaps for uniform distribution of hot air throughout the height of the drying chambers. After adjustment of the thermal mode, the dampers are fixed tightly. 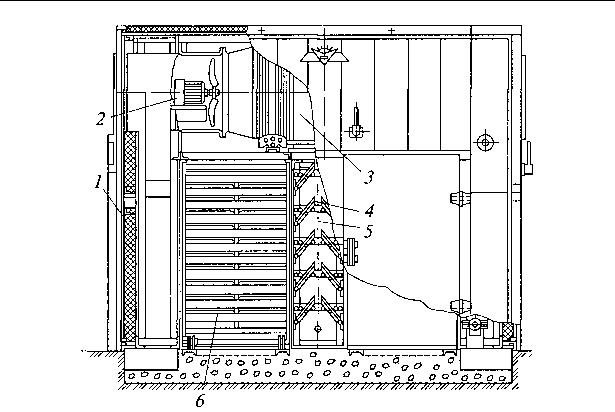 The dryer has two chambers with 6 trolleys installed in them for drying products, heated by two air-circulation systems with recirculation. The air is blown by the fans through the heaters, heats up, enters the middle channel of the 5, is evenly distributed by the flaps and passes between the shelves of the installed trolleys with the products. The exhaust air enters through the exhaust channels in the basement of the dryer, and part of it through the recirculation channels equipped with valves, is blown by fans through the heaters into the dryer chambers.

Each cell holds two 6 trolleys along 25 shelves. On the shelves stacked trellised trays. In total in the dryer on four trolleys 200 is placed opposite the size of 900 x 450 mm.

After installing the trolleys with products, the doors of the chambers are tightly closed, the supply of steam and air is activated. At the end of the drying process, the steam is turned off sequentially, then the air and then the trolleys with dried products roll out.