Special types of bread products include donuts and rusks, gingerbread, breadsticks, straws, etc. The complexity of the production of these products, as a rule, is 3 ... 5 times higher than the production of mass bread. This is due to the more complex technological scheme of production and the insufficient level of its mechanization. The main difference in the composition and layout of production lines for the production of special varieties is in the selection of molding equipment, as well as machines and apparatus for performing special technological operations (rubbing dough, scalding - welding bagel blanks, aging and cutting breadcrumbs, etc.).

Equipment for the production of

Machines for making and rubbing dough. The unit for the continuous preparation and rubbing of the dough (fig. 3.36) consists of two groups of machines: for preparing the dough and for kneading and rubbing the dough. The first group includes a continuous kneading machine 2 with a dosing unit for 1 flour and an automatic dosing station 6, a five-section hopper for fermenting 5 brew and a screw dosing unit for 7 brew; in the second group - the dough-mixing machine 4 with similar dosing units for flour, water and solutions and the 8 screw press, used to compact and increase the plasticity of the dough under pressure,

With the exception of the screw press, all machines, mechanisms and apparatus of the unit are located on a common metal platform.

All mechanisms and machines for making brew are driven from the common 3 control panel with a typical CEP command device. On the shaft of the 2 kneader, along the helix are eight kneading blades, the rotation angle of which 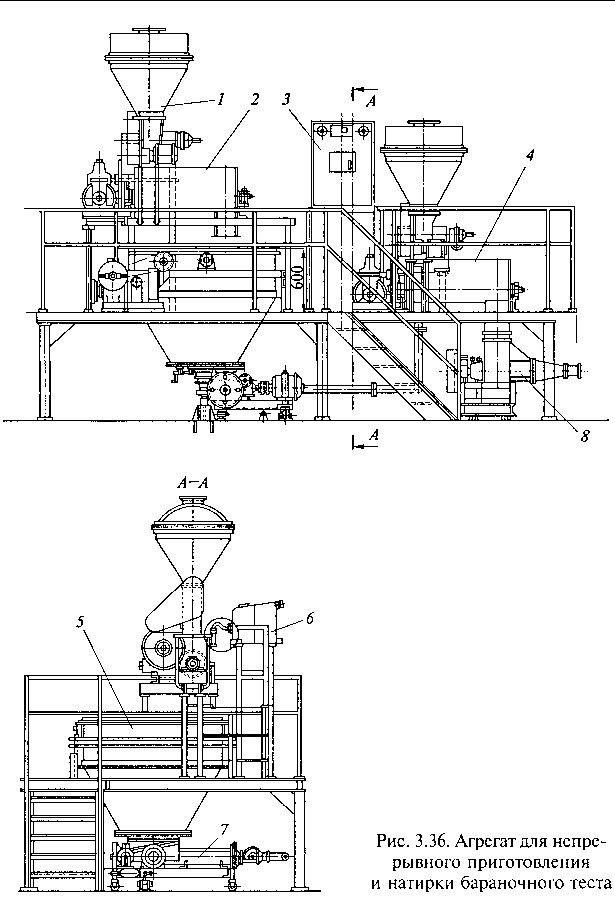 Figure 3.36. Unit for the continuous preparation and rubbing of dough.

can be changed with long nuts. The shaft from the electric motor is driven through a worm gear and a pair of cylindrical gears.

A speed variator is provided to regulate the feed of the dough to the dough in the drive of the 1 auger dosing screw allowing to change the screw speed within 60 minutes-1. In addition, the flow of the dough can be adjusted by the choke installed on the outlet of the dispenser.

The metering screw is driven by an electric motor through a continuously variable V-belt variator, a worm gear and a pair of spur gears.

The hopper for fermentation of brew has five sections and rotates around a supporting column, on which a fixed bottom is rigidly fixed, located under the bottom of the bunker. The latter has circular cuts corresponding to the size of the hole in the fixed bottom, to which the exhaust pipe is welded. To this nozzle joins a dough screw dosing.

The bunker is driven from the electric motor through the V-belt transmission and worm gear. Chain and bevel gear movement is transmitted to the shaft, at the end of which is fixed an asterisk connected to the chain, welded to the circular flange of the bunker.

The main mechanisms and machines for kneading and rubbing dough are the 4 kneading machine, a screw press and a tinting machine.

For better kneading of the tough dough on the inner surface of the trough of the 4 kneading machine, two fixed fingers are provided, and the kneading capacity is divided into two compartments by two removable partitions. In the exhaust pipe is provided for the gate.

The screw press consists of a cast steel body in which a variable pitch screw 200 mm in diameter rotates, forcing the dough into the compression chamber. The output section of the camera compression 220 x 50 mm. A rectangular nozzle is attached to the flange of the press - a matrix that forms the dough in the form of a ribbon.

The screw of the press is driven from the electric motor through a continuously variable V-belt speed variator, a worm gear, a pair of spur gears and a chain transmission. Speed ​​variator makes it possible to adjust the screw rotation speed within 3..12 min-1

When portioning the donut dough, a tinting machine is used (fig. 3.37), which consists of a cast-iron bed b, an 5 belt conveyor, two rolling rolls: the upper ribbed 3 and the lower smooth 2. connected with movable bearings of a grooved roller. The minimum gap between the rollers is 4 mm. Conveyor belt width 35 mm. 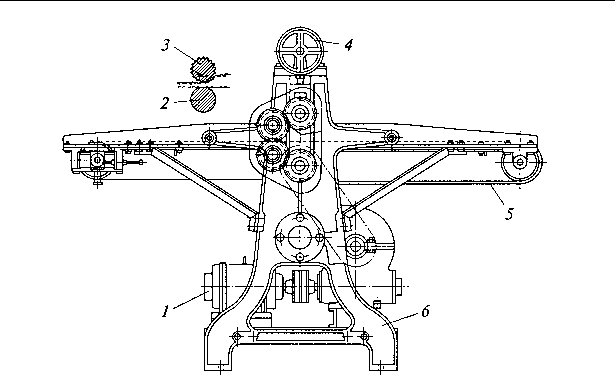 Vuya chain to the drive drum of the conveyor. The upper roll rotation is transmitted through two pairs of cylindrical gears located at the second side frame. The conveyor with the help of a reversive magnetic starter, switching the electric motor, makes a direct and reverse course. To maintain safe working conditions, a grill interlocked with an electric motor is provided on both sides of the ribbed roll.

A piece of dough weighing up to 10 kg is laid on the conveyor belt and rolled under the ribbed roller several times. At each pass, the layer of dough is manually folded in half.

The upgraded tinting machine has an automatic switching of the movement of the conveyor by means of a reversible magnetic starter, which switches the motor to forward and reverse. This process is repeated as many times as necessary to rub the dough.

After rubbing, the dough should rest for 20 ... 30 min. At mechanized enterprises, dummies and conveyor cabinets of final proofing or cabinets with conveyor belts and air conditioning inside the cabinets are used for retrieving dough.

At small-scale enterprises and in individual workshops, donuts are made on the dough on stationary or mobile tables. Tables are made with round rotary covers with a diameter of 1,5 ... 2 m and are installed near the tinting machine.

Machines for dividing and molding dough pieces of donuts (fig. 3.38). These machines consist of the following main components: a mechanism for injecting dough A, a forming head B, a belt conveyor C, a bed G, a drive mechanism D and an electric blocking unit ensuring the safety of the machine’s maintenance (not shown in the figure).

The dough injection mechanism A consists of a piston box with an 1 receiving funnel for the dough, two 27 pressure rolls and four 26 cylindrical pistons. Injection rollers are driven by a ratchet and a pair of cylindrical gears. The cylindrical pistons 26 are pairwise interconnected by the transverse axes 25, connected to the cam 17 through a two-ply 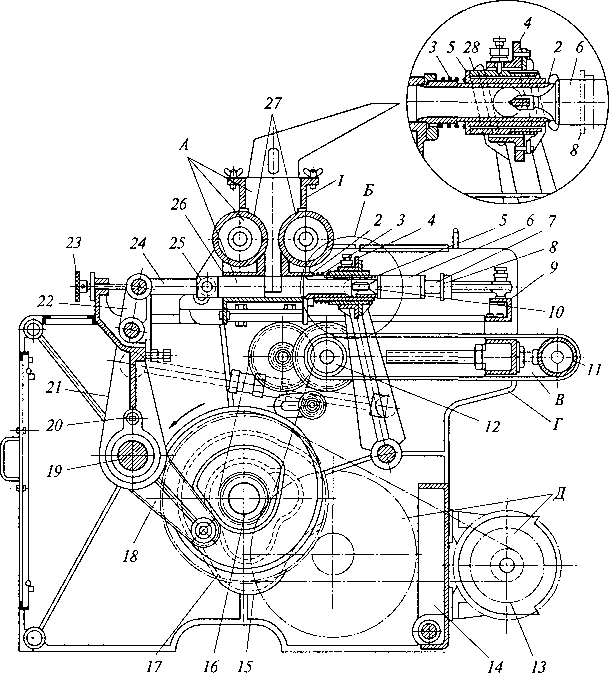 18, 27, special 22 lever and two 24 thrust levers. The two shoulders 18, 27 levers consist of two parts sitting on the 19 shaft and connected with a regrind with a 20 finger. If high forces occur in the piston box, the 20 pin will be cut off on the regrind, preventing breakage of the machine.

To change the weight of the dough pieces, depending on the name of the bagels in the two-arm 18, 21, an adjustment screw with the 23 handwheel is provided. With the screw, you can change the stroke of the pistons 26, and consequently, the number of dough supplied by the pistons.

Forming sleeves 2 are mounted in a special plate in the sockets of the piston box and are a continuation of the piston channels. At the exit end of the 2 liner, the 10 rolling pin is mounted using the 6 divider. The 5 cylindrical knives are worn on the 2 forming sleeves, which also carry 3 coil springs. Rolling sleeves 7 are fastened on the traverse, which can slide along the two cylindrical 4 guides. 8 dumpers are mounted in mounted bearings

Band conveyer В consists of drive 12 and tension 11 drums and a fabric conveyor belt. The conveyor is driven from the main shaft 16 through chain and gear transmission.

Machine bed Г It consists of two cast-iron frames, interconnected by spacers, a piston box housing and an 9 bracket of a conveyor belt.

Drive mechanism Д consists of an 16 electric motor, a belt drive, two pairs of spur gears, two 72 and 14 cams, two lever systems and the 13 main shaft. The electric motor is mounted on the 15 movable plate, hinged to the frame frames. The tension of the drive belt is achieved due to the force of gravity of the plate and the electric motor and the force of the spring.

The electrical blocking unit provides for switching off the electric motor when removing the front and rear covers connected by a lever system with a limit switch built into the electrical control circuit of the magnetic starter.

Flat dough, prepared according to the recipe, is put into the 7 hopper, captured by 27 rolls rotating towards each other, and pumped into the test chamber, from which 26 pistons are fed into the piston channels.
Under the pressure of the pistons, the dough (see fig. 3.38, type B) is pressed through annular gaps between 2 sleeves and 6 rolling pins, rolled into spiral-shaped rings, cut with 5 cylindrical knives, rolled out with 4 sleeves and pushed out of the sleeves with 8 resetters. 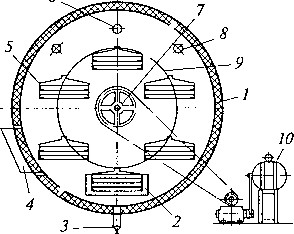 For making different types of bagels, the machine is equipped with interchangeable working elements: three sets of rolling out glasses and diverters

and two sets of skalok. Combining the diameter of the skalok and glasses, you can produce donut products, different in size and number of pieces in 1 kg.

Scalding machine. After proofing, the dough pieces are baked before boiling in boiling water for 0,5 ... 2 minutes or scalded with steam for 60 ... 90 s.

The scalding machine (fig. 3.39) consists of a closed cylindrical metal 1 drum with insulation and an outer casing, an 7 shaft with two 9 rings, between which six 5 bunk cradles 1920 x 350 mm in size are suspended.

Saturated steam pressure 50 ... 80 kPa is fed into the upper zone of the drum, where a steam bag is created. The duration of the scalding of dough pieces is 70 ... 75.

The machine is driven from the 10 electric motor through a V-belt drive, gear reducer and chain drive to the machine shaft.