Перейти к содержимому
In this technology, agar as gelling agents in zefirnoy weight dry pectin replaced. About 3% apple pectin introduced into applesauce solids content 10% and stirred in a mixer for 2 hours for swelling pectin. Dense puree through a sieve with holes of 1mm. Applesauce is pumped into the container from which metered into shake up the machine type SM-2. It also is dosed granulated sugar, egg white and sodium lactate. The amount of sodium lactate contributed ranges from 0,65 to 1,15% by weight of the apple sauce depending on its acidity.

The shot down over 5-8 minutes mass add sugar, molasses syrup (in a ratio of 1: 1) and continue churning 5 minutes. Essence is then added, the acid is stirred 1 min and mass directed to molding. 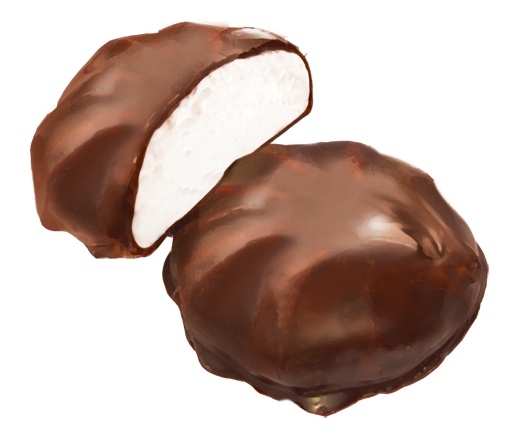 Shaping is carried out on a marshmallow zefirootsadochnyh machines
Prepared marshmallow mass or gravity fed through a flexible hose to the hopper with a water jacket. mass temperature is controlled with a thermometer. At the bottom of the hopper is mounted dozirovochno- depositor mechanism consisting of piston fillers and ferrules with serrated edges, mounted on a movable frame and connected with excipients flexible rubber hoses.

Trays for jigging marshmallow halves mounted on a chain conveyor. With scallops, attached to chains, they are fed continuously under the machine hopper.

Through a sequence cycle of operations performed Dosing-jigging mechanism using the system eccentric cam and gear, marshmallow mass is deposited in equal portions on trays. At the same time frame with reinforced tips on it performs a complex cross-longitudinal translational motion, in which each portion of the molded mass takes a circular or oval in shape with fluted (corrugated) surface

Trays with a cast on them marshmallows (halves) go on roller conveyor, where they are removed, mounted on a rack trolley and sent to vystoyku.

Trays allocated for jigging of zephyr, pre-cleaned from adhering to them zephyr mass of particles with special knives.

Vystoyku marshmallow halves is carried out in cells in which for the first 3-4 hours support 20-25 temperature ° C, and subsequent 5-6 hours 33- 36 ° C at a relative humidity of 50-60%. In the process of going vystoyki studneobrazovanie zephyr mass, as well as some of its drying, contributing to the formation of a crystalline crust. By the end of vystoyki humidity marshmallow 20-23%.

In the absence of special cameras marshmallows dried indoors plant at a temperature not lower than 25-30 ° C and enhanced ventilation within 24 hours.

After vystoyki trays with marshmallows mounted on a chain conveyor, which brings them under the mechanism for dusting with icing sugar, from which they are moving further bonding portion halves. From the surface of the tray manually separate the two halves and connect their flat sides.

If the grade is manufactured with marshmallow filling, before gluing the halves marshmallow inside lay one or another filling, consisting of marmalade figured products, pieces of fruit or prosaharenyh from whole cooked in sugar syrup berries.

Bonded marshmallows shift on the sieve, ready made paper moving along a conveyor belt. Filled sieve removed from the conveyor and mounted on a rack trolley, which is directed to vystoyku. Zephyr kept for drying on racks in a dry place at a relative humidity no higher than 60-65% for 8-12 hours. The final moisture content of marshmallow before laying must be from up to 16 20%.

Marshmallow halves can not stick together, and in addition to dry and chocolate glaze. This not only improves the taste of marshmallow, but also extends its shelf life. Temperature products entering the glazing must be no higher 30 ° C. The process of glazing and equipment are the same as for the sweets. Glazed marshmallows produced on agar or furtsellarane.

This site uses Akismet to combat spam. Learn how your comment data is processed.

Information portal about food and confectionery production - Baker-Group.Net. All rights reserved. Use of materials of this site without the written permission of the author is allowed only if there is a direct, open to search engines, hyperlinks to material on this site.