Pyativalkovaya mill (Fig. 30) takes a trolley unloaded from the kneading machine in the chocolate mass is located along the lower roll 6 hopper (see. Fig. 30, b).
All rolls are smooth and hollow. The inner cavity of each current supplied cold water. This cooling is intended to prevent overheating of the chocolate mass being processed during operation of the mill.
Rolls 1, 3, 4, 5 and their pins are secured in the mobile bearing and roller-2 in fixed. Movement of podshlyapnikov can zoom in or out on the rolls of the fixed roll and from each other and thus increase or decrease the space between two adjacent rollers. The rollers have the same diameter, rotate in the directions indicated by arrows in the figure, and have different speeds. Roll 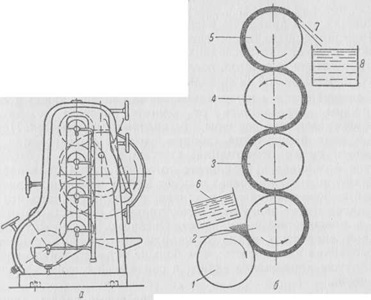 2 has greater speed than roller 1, 3 the roll - more speed than roller 2, etc. Thus, each subsequent pplok lime has a relative velocity with respect to the previous one... For most new pyativalkovyh mills, whose roll diameter often are 0,4 m the number of revolutions of the rolls, the district and the relative speed are expressed by the following values.:
Roll number 1 2 3 4 5
Revolutions per minute n. 20 48 96 153 206

Relative speed in m / s. ... ... 0,58 1 1,2 1,1
When the machine is the chocolate mass is drawn from the hopper 6 in the space between the rollers 1, 2, blowin '
2 roll due to its higher speed oblegaya its right side, is fed to the clearance between the rolls 2, 3, hence entrained roll 3, oblegaya its left side, and so on. d.
To the charge of the last roll 5 tangentially to the direction of the moving chocolate fortified still thin steel plate 7, often referred to "knife" factories, which removes from the surface of the roll chocolate mass, directing it into the receiving box 8.
By adjusting the dimensions of the lumen by moving the movable rollers to be the last to find a position at which the value of the lumens, successive in the travel direction of Chopping chocolate mass gradually decreases.
The particles of cocoa and sugar powder contained in the chocolate mass, moving from one lumen to another, having smaller dimensions, are gradually ground. The solid particles penetrated into the grinding zone undergo two basic types of deformation: compression and shear. The compression deformation results from the fact that the rolls squeeze and compress the solid particles passing through the gap between the rollers; The shear deformation results from the fact that each roll has a known relative speed with respect to the preceding roll. Obviously, there is a definite relationship between the relative speed of the roll and the shear stress: the greater the relative velocity, the greater the shear stress and the associated grinding effect.
Grinds chocolate mass during roll machines usually moves from the bottom up. With this movement direction the most fine particles of chocolate mass at the top of the car, and if the result of any random part processed chocolate mass will fall down and mix with the moving parts of the machine at the bottom chocolate mass, the latter will not be spoiled larger impurity particles.
Earlier machines were widespread with granite rolls, as well as machines with metal rollers, but working at lower speeds (40-50 / min).
Low rate of these mills is caused by a low intake capacity and can not provide a high degree of grinding of chocolate mass. Furthermore, in these mills may chipping particles of granite rolls and their penetration into the chocolate mass.
These shortcomings have led to the fact that the machine with granite rolls have long been supplanted by machines with metal rolls.
Application roller mills with metal rollers allowed to slightly increase the speed and improve the fineness. However, to achieve the required degree of grinding chocolate mass had to resort to multiple handling. So, on a triple roll mill to obtain a chocolate dessert was adopted five-time processing chocolate masses to gradually reduce the size of the lumen.
Through the use of our factories pyativalkovyh mill in which the rolls are made of hard metal and can operate at high speeds, without incurring long prsmya wear fineness processed chocolate mass has reached a limit that can be limited or even single tukratnoy processing chocolate mass.

On your device a mechanism for adjusting the clearance between the rolls of the mill pyativalkovoy not significantly differ from those in the above vosmivalkovyh mills to cocoa liquor. Marked where the difficulties associated with the need (in the regulation of the magnitude of the lumen) actuating the two steering wheels, equally apply to pyativalkovoy chocolate mill under consideration here.
Came from the kneading machine in the mill pyativalkovuyu mass contains 25-27% cocoa butter, and at a temperature of about 40-42 ° has a doughy consistency. In this form it is sufficiently thick layer entrained along the first roll product. As we move to the subsequent fitting of chocolate rolls tape is made thinner, the solids contained therein are crushed more and the total of the surface increases.
Having reached the last roll of the machine, the chocolate mass rapidly changes its consistency instead connected, semi-liquid, testobraznoy it when leaving the car becomes a powder. Such consistency change arises from the fact that the chocolate mass contained in the cocoa butter, distributed throughout all as increasing the total grinding surface of the solid phase, it takes the form of an increasingly thin films, causing a change in its physical properties.
Acad. Lazarev, prof. B. V. Derjaguin et al. Found that thin layers of liquid dispersed phase enveloping behave like molecules solid.
Acad. Rehbinder notes that the ever-increasing refinement of the solid cocoa butter, distributed throughout all increasing the total surface, unable to cover completely on all sides every part of this phase. Coming into contact with each other with their bare patches, particles together in a kind of cages in the middle of which the cocoa butter is delayed. The emergence of such a structure entails drying chocolate.
To restore the consistency of the chocolate mass and its ability to undergo further grinding on roller mills, the product obtained after the first treatment on a five-high-speed machine is loaded into the kneading machine, a small amount of cocoa butter (about about 3-4%) is added; All the contents, heated to 40-42 °, and thoroughly stirred. The duration of such processing of chocolate mass from 10 to 20 min. At the end of this operation, called a workout, the chocolate mass, which has again assumed a semi-liquid consistency, is sent to the second roll.
To reprocess chocolate on pyativalkovoy car is necessary to enlighten the dimensions have been here less than in the previous processing machine. Only in this way will provide a second milling grinding efficiency.
The chocolate mass during the second rolling undergoes the same changes, which were observed during the first trial. Therefore, in the present case the chocolate mass at the outlet of the mill is the powder structure.
In delyah recovery in the chocolate mass pasty semi-liquid consistency, necessary for further processing of the product, once again resorted to the warm-up and crushing the mass in a kneader with the addition to the product 3- 4% cocoa butter. This operation also lasts about 10-20 minutes. and unlike the above-described wiring it is called in factories.
Table. 18 presents data on the dispersion of chocolate, corresponding to different machine performance.
Table 18

Performance chocolate rolling machines depends on the working roll length, size of the gap between the last two rolls in the course of product and an average circumferential velocity of the mass in the lumen.
Simultaneously, the machine roll performance is affected by other factors, particularly in the content of the treated chocolate mass cocoa-butter.
The lower the content of cocoa butter in the chocolate mass being treated, the higher the viscosity, the more dense and thick and it envelops rolls machine performance is improved; at elevated oil content of cocoa in processed chocolate mass viscosity is reduced, and it is captured by the rollers worse, resulting in reduced machine performance.
In conclusion, it should be noted that the size of the gaps between the sticks and varies under the influence of exposure to mechanical factors. Thus, observations have revealed that after a more or less prolonged period of operation starting geometrically correct shape of the rolls is distorted and becomes concave cylindrical surface, it appears along the length of the stick oval cavity, increasing from the edges of the roll to his her Redin.
To eliminate the strain occurred in the roll mills resorted to grinding them into grinders.
Distortion arises clearance between the rolls as a result of wear of bearings, and as a result of inaccurate adjustment of the gap between adjacent rollers.
The current roll mills do not have instruments to monitor the degree of crushing weight, except for the mills produced by some foreign companies. Such roll mills are provided with devices indicating the pressure between the rolls and the reduction ratio of the chocolate mass.
The duration of the impact grinding force during the passage of the chocolate mass through each gap between the rolls is very small and is in the range between -1 / 200 and 1 / 2000 seconds.
The fineness of the chocolate mass
Past studies of the Department of fineness chocolate masses after their single and double treatment on pyativalkovyh machines led to the following results (Table. 19).
Table 19

In these tests pyativalkovaya machine on which the chocolate mass is subjected to a first rolling, working performance 350 kg / hour, and the machine on which the mass was subjected to a second rolling, working performance 250 kg / hour.
The data in Table. 19 data show that the mass of chocolate after the first rolling rough grinding and different content of particles whose diameter is less 20 q does not exceed it 38% by volume solid phase. But after the second rolling crushing the chocolate mass does not reach the proper limit: the fraction with particles less 20μ barely 50%.
The above-mentioned distortion of the clearance between the rollers and so often there are signs of wear and tear rolls are the main causes of the presence in processed on roll machines chocolate masses a high percentage of coarse fractions.
There are cases when the chocolate mass after the second rolling, and has a higher degree of comminution. In particular, such phenomena are observed when the productivity of the machine does not exceed the roll 125 kg / hour, and the rollers had not yet subjected to wear.
Among the other changes that occur when processing the chocolate mass to roll machines in general and pyativalkovyh machines in particular, it should be noted the change of moisture content and a decrease in the number of water-soluble tannins.
The decisive factor here is the strong crushing the solid particles, as a result of which there is a large number of new surfaces have not been exposed to air. No less important is the fact that is excavated into pyativalkovyh machines chocolate mass coming out of the lumen of the small wide band, forming a very large surface.
In cases where common chocolates produced after secondary processing product pyativalkovoy and wiring machine in a kneader the process of preparing the chocolate mass is considered complete and is sent to the last stage of tempering and molding.
Common varieties of chocolate are characterized by a slightly higher sugar content, some coarser grinding solids and tenderness of taste inferior to high-quality varieties of dessert.