The methods and modes of roasting cocoa beans
For roasting cocoa beans the most widely used in our chocolate factories are cylindrical and ball machines.
Cylindrical fryer (Fig. 8) lined with brickwork. The main part of the device - a cylinder
-Installed door and a pair of internal blades. The hot gases generated from the fuel burned in the furnace are washed into the chimney by washing the side surface of the rotating cylinder. Cocoa beans are loaded into a rotating cylinder through a metal funnel that is integral with the front door hinged on hinges. The cylinder is loaded with 150-200 kg of beans; They do not have to fill the entire cylinder and usually occupy no more than 30% of its volume, so that during the roasting process the beans move along the inner surface of the cylinder, mixing and pouring. In this way, the danger of local overheating (beans, the heat exchange in the mass of beans and the heating of each individual bean is accelerated and the removal of moisture and volatile substances is facilitated. 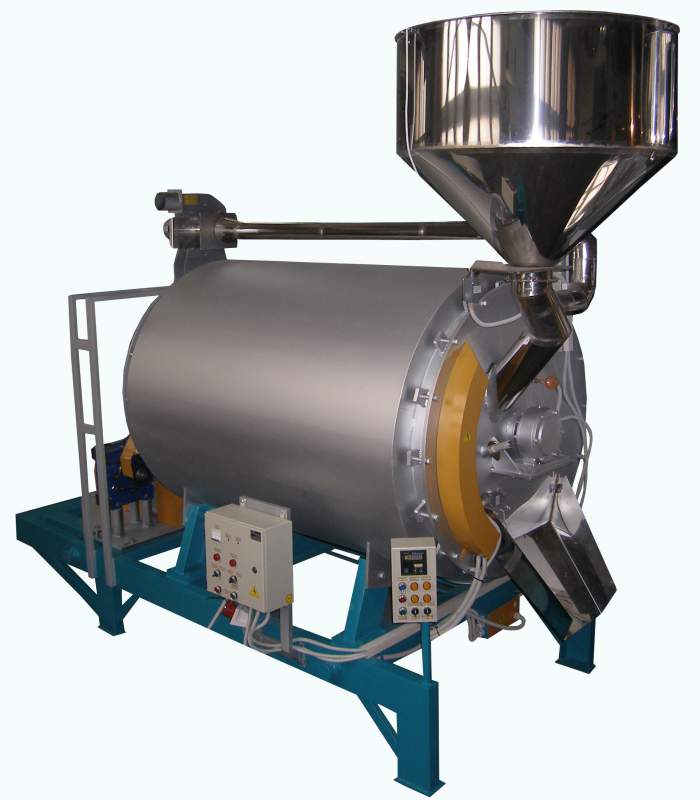 Evolved from fried beans water vapor and volatiles as they accumulate in the cylinder tube sucked by a fan. Over the course of roasting observed on samples that periodically take over the work done in the door opening by means of a probe-probe.
Observing the fragility, aroma, color and taste of the fried beans extracted from the barrel by the stylus, the master determines the moment of their readiness. Too high roasting temperatures and excessive long-term effects lead to a weakening of the characteristic aroma of cocoa beans and to the appearance of an unpleasant odor of acrolein, the product of the decomposition of glycerol-containing cocoa butter. Fried beans, for these reasons, should be quickly removed from the frying bar at the end of the roasting and cooled. For this purpose, the door is opened and the cocoa beans are unloaded for cooling to the upper hole of the trolley.
At such temperatures cooling of cocoa beans through 10- 11 min. reduced to 50-60 °, and through 15-20 minutes. to 30 °.
The temperature regime of the process of roasting cocoa beans in cylindrical fryer studied the department and submitted on schedule risk 10. The first period of roasting, lasted about 10-20 minutes, characterized by a fall of temperature in the apparatus to 30-33 °. Following this, it increases for prmerno 2 ° per minute and reaches the end of the roasting 130 ° C 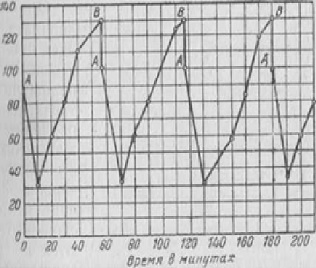 Fig. 10. Schedule temperature when roasting the beans in a cylindrical apparatus:
A moment of loading; At the time of discharge-beans.

Last loaded into the hopper 10, 3 from a bucket elevator is fed into the heating drums. Along the pipe product moves screw 5.
Cooling unit represents a steel pipe 7, on which roasted product moving towards the screw air sucked fan 9 and 8 ejected through the cyclone, which traps air entrained particles and dust husk.
Roasting їv this unit being to a moisture content of cocoa beans 3%, unit performance 100 kg / hour, the temperature of the cocoa beans after roasting їv about 110 °; roasting duration 30 minutes
Roasting high-frequency currents
Recently, for a uniform preheating of dielectrics and semiconductors, the high-frequency heating method is quite widely used, in which molecules of a dielectric or semiconductor placed (in an electric field are polarized and as a result tend to orient in accordance with the direction of the field.
The electric field generated by the high frequency unit, changes direction several million times per second, the same time and change their orientation in the molecules by intermolecular friction material is heated uniformly throughout the thickness.
MTIPPa Department in conjunction with the Energy Institute experiments on high-frequency current cocoa bean roasting were conducted.
On the basis of these experiments, which gave positive results, on the instructions of technical documentation production plant for roasting cocoa beans in the field of high frequency currents.
Unlike existing batch fryer, this plant is continuously operating. In it there (possibility of quick frying regime change (through the generator configuration changes), as well as the precision of a given regime that ensures uniformity of roasting and prevents burnout fried product.
Chocolate from beans roasted high-frequency current, has good taste
It is believed that it will implement this method of roasting cocoa beans in the near future.

3 replies to “Methods and modes of roasting cocoa beans”