Перейти к содержимому
The coating is a special process of consistently applying layers of chocolate or sugar using rotating surfaces ( by stencil method). Suraging sugar is considered in different sections of this book, and below we consider only chocolate coating.

Chocolate is often coated with nuts (almonds, hazelnuts and peanuts, as a rule, are first roasted, and Brazil nuts are not). Raisins, condensed milk balls, canned ginger or cherries, various pastes and nougat are also used as fillings. The filling must be relatively solid, otherwise it may spread over the sheet.

•   applying a chocolate layer (or sugar in sugar panning);

•   final glazing to make the products shine and protect against abrasion and moisture.

Drageeing devices (fig.) Are made of copper or stainless steel especially for those or other purposes: coating with sugar, chocolate or for simple glazing. They can be equipped with devices for emptying and changing the speed. Such drageeing devices are also equipped with air ducts, on which the products blow air during their rotation. The temperature and humidity of the air is important to maintain within the specified narrow limits. Cooling dry chocolate requires cold, dry air, while warmer syrup requires warmer air. Initially, syrup and chocolate were applied manually, but in modern large installations they use spray guns (tuned to individual sheets with the ability to adjust the direction of the jet when the device rotates). The supply is carried out by pipeline from the tanks, and one can control all the pan coating devices.
pelleting technology usually consists of three separate operations:

•   Preliminary enrobing fillings;
•   applying a chocolate layer (or sugar in sugar panning);
•   final glazing to make the products shine and protect against abrasion and moisture.
Drageeing devices (fig.) Are made of copper or stainless steel especially for those or other purposes: coating with sugar, chocolate or for simple glazing. They can be equipped with devices for emptying and changing the speed. Such drageeing devices are also equipped with air ducts, on which the products blow air during their rotation. The temperature and humidity of the air is important to maintain within the specified narrow limits. Cooling dry chocolate requires cold, dry air, while warmer syrup requires warmer air. Initially, syrup and chocolate were applied manually, but in modern large installations they use spray guns (set up on separate sheets with the ability to adjust the direction of the jet when the device rotates). Filing is done by pipeline from storage tanks, and all drazhirovalnymi devices can control one operator.

Below is an example of panning of nuts. 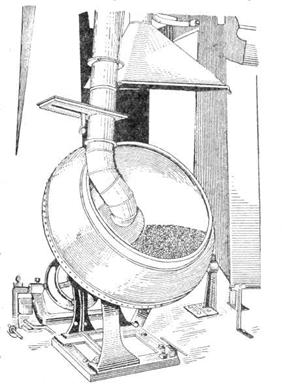 Pre-glazing is carried out for the primary coating of the surface of the nut with a thin layer of chocolate, which prevents the penetration of nut butter into the chocolate and the subsequent formation of fatty deposits or softening of the chocolate. When applying thick chocolate coatings, you can do without this stage.

For such a coating, there are different formulations, however, to achieve the best results, the syrup should be viscous and not crystallize when it comes into contact with the dried layer. To increase the viscosity, gum arabic or an equivalent substitute is added to the mixture, and glucose syrup is used to prevent crystallization. The shares of both are selected experimentally, depending on the type of filling.

Some pastry chefs build glaze layers with a mixture of cocoa and powdered sugar. This method is especially effective when panning canned fruit or ginger, since it helps to neutralize the stickiness of the preservative syrup, which is dried by blowing air with a temperature of 21-24 ° C and relative humidity 50%.

Putting a layer of chocolate. To do this, use dark or milk chocolate, which to cover the entire surface of the product must be sufficiently liquid. When using the manual coating process, it is better to use tempered chocolate, which allows for its rapid crystallization, to prevent the formation of sticky layers and discoloration of products. When drazhanirovanii using a sprayer, the best results are achieved using non-tempered chocolate (provided that its temperature is reduced to 34-35 ° С). The mechanical spraying process promotes the formation of crystals and the solidification of chocolate.

Since the final gloss is given to have sugar-coated products, a slight discoloration of the chocolate at this stage is considered to be acceptable.

The chocolate layer is applied evenly, and its curing occurs under the influence of a cold air stream with a temperature of about 13 ° С with relative humidity 60% and below. When drazhirovanii should avoid sticking products, which largely depends on the skills of the operator in applying chocolate.

Final glazing. There are various methods to achieve the final gloss. The best results are achieved by applying two separate layers - syrup and shellac.

Chocolate coated products should preferably be deposited on free pallets before glazing, which will give the opportunity to form a hard texture; If glazing is carried out immediately after chocolate coating, the shape of the products may be disturbed.

“Syrup” glaze is similar to that used at the pre-glazing stage (food dextrin can also be used), and gum crystals can be used instead of gum arabic. The amount of ingredients in the recipe and the concentration of the syrup is selected depending on the type of glazed products (the purpose of this glazing is to obtain products with a smooth surface that does not crack, peel or crystallize and can serve as the basis for the final glazing).

“Syrup” icing is obtained by pouring the syrup onto a rotating mass of nuts. In a device for coating, the syrup quickly covers the surface of chocolate coated articles. At the same time, spraying is not necessary, and therefore the whole portion of the syrup according to the recipe can be added in two or three steps with intermediate drying.

Air drying is again used for drying, with temperatures ranging from 18 (milk chocolate) to 21 ° C (dark chocolate) and relative humidity 50%. Drying is continued until sticking is stopped.

Upon completion of this step, it is desirable to withstand enrobing chocolate sheets least 12 hours at about 18 ° C and relative humidity 50-60%. As a result, the glaze is stabilized and a film is formed with the same moisture distribution over the entire area. After such a drying, a brilliant wax glaze is applied - if it is applied in a rotating device, it is coated with a wax layer from the inside. Beeswax or carnuba waxes are usually used (the latter gives a firmer glaze), although there are also formulations with acetylated glycerides. Any wax gives a relatively matte finish, and shellac glazes should be used to impart gloss.

It is preferable to use shellac with the content of natural wax, as it gives a more elastic film and is distributed evenly. The resin is dissolved in ethyl or isopropyl alcohol, resulting in a thick, opaque (due to the presence of wax) solution, but the glaze is quite clear. The concentration of the solution depends on the type of glazed products, but is usually 25-30%. Appropriate shellac glazes are commercially available, and they are usually applied in rotating drageeing devices. This technology requires certain skills, because due to the rotation of the device, the icing should be made in an amount that is barely enough to fully cover each product. Immediately after this, the rotation stops and the solvent should evaporate. At this point, the device should not rotate, otherwise the icing will peel off. Evaporation of the solvent can be accelerated by blowing air through the device. Such solvents are explosive, and therefore, in accordance with the regulations of some countries, this operation should be carried out in a separate room using a remote control. When the glaze is dry, the device is twisted two or three times to separate the products from each other, after which they are unloaded onto sheets for final drying and hardening.

The company Zinsser (USA) offers several confectionary shellac glazes, including those with a low content of beeswax and acetylated monoglycerides. Their addition allows to reduce the stickiness of products during the rotation of the drageeing device. German company Kaul GmbH вLaunches a range of water and alcohol-soluble glazes called «Capol". They are suitable for coating with both chocolate and sugar.

Besides glazing, shellac glazes provide good protection of products against moisture, due to which chocolate products drafted by them are very popular in countries with hot and humid climates.

In addition to chocolate-coated products, chocolate products coated with icing sugar are currently very popular. Glazing with sugar is similar to glazing with sugar syrup, but it is carried in thicker layers, forming a kind of sugar coat. For details on this technology, see chapter 6.

Considerable interest in the confectionery industry was caused by the use of zein as a protective coating. Zein is corn protein, the addition of which to foods is not restricted by any regulations. Zein is soluble in ethyl and isopropyl alcohol in proportion (5-20% mass.). Plasticizers, glycerin and propylene glycol, are also used in zein solutions.

It is believed that the glaze can be applied zein in rotating drazhirovalnyh devices. They are also widely used in the production of compressed tablets. Their description can be found in branded materials Freeman Industries Inc. (USA) Benzian A.G. (Switzerland).

A list of major manufacturers and their research units

Bindler , Bergneustadt, Germany - installations for the production of confectionery buildings.

Coilman , Lübeck, Germany - machines for the manufacture of hollow products.