Arriving at the chocolate factory cocoa beans are usually clogged more or less significant amount of impurities; bits occur here earth, sand, pebbles, bits of twine, hessian fiber, metal and other debris. Also, the cocoa beans are identical in size and shape of the grain.
Cocoa beans contain a certain amount of doubled and stuck together, broken, as well as pest-eaten beans and shell particles.It goes without saying that processing such beans into chocolate without first cleaning them from all contaminants and without sorting is completely unacceptable.
When sorting cocoa beans must be separated from them, broken and crushed beans, clippers shell and immature grains. Table. 2 is the chemical composition of large, small and skinny beans.
Table 2

Some foreign factories chocolate cocoa beans are sorted by size and sent large beans on production of high quality chocolates, and small - for the production of lower quality varieties.
For cleaning and sorting of cocoa beans to chocolate factories are cleaning and sorting machines with cylindrical or polyhedral prismatic screens (such Burato mill) and flat screens (such as mill separators).
Sorting machines with cylindrical or prismatic screens have a number of disadvantages, of which the following should be noted:
1. Low (sieve square utilization due to the fact that the sorting zone is only the lower screening cylinder.
2. Cocoa beans when falling to the bottom of the cylinder can be subject to fracture, especially fragile varieties so sorters such screens more superseded and replaced with more sophisticated machines with flat screens which do not have these disadvantages.
Fig. 1. Chocolate preparation scheme. Making cocoa liquor, cleaning and sorting cocoa beans and making chocolate

Be cleaned and sorted cacao beans discharged from the bags in the hopper A, where they ladle and the rotor element in 1 transferred to a distribution ramp 2
With the latter, the beans are sent to the brush mechanism, consisting of a brush segment 4 and a rotating cylindrical brush 3. Here, the beans are cleared of adhering to them dust, earth and other contaminants. In cases when beans varieties that have a very fragile shell (for example, by turning the brush segment, increase the gap in the brush mechanism, eliminating the danger of mechanical damage or crushing of the beans) are processed for processing .The beans enter the small shaft with inclined partitions 5 from the brush mechanism. In this case, all kinds of fine impurities and dust are picked up by a strong stream of air sucked in by the 8 fan and carried to the 6 chamber, where, due to the increase in cross-section, the flow velocity slows down, in connection With which the impurities settle to the bottom of the chamber and the screw 7 are withdrawn from the machine.
Beans, pouring on partitions, arrive on flat screens, made of sheet metal is stamped with holes in them.
Sita are located one above the other two tiers. Each tier consists of two sieve sections with holes of different sizes: in the sieves of the upper tier in the first section - 12 mm, and in the second - 15 mm - In the lower tier the 10 sieve has holes about 2 mm, and the 12 sieve is about 6 mm. Sorted beans are fed to the 9 sieve. Under the influence of the reciprocating motion of the sieve, the beans move from left to right, and all beans and impurities passing through the holes of the sieve pass through the holes, the size of which is less than 12 mm. Moving further, the beans move to the 11 screen and pass into the cone. On the segment of the path along the inclined channel above the magnets, the beans are freed from ferro-impurities, then they enter the control conveyor 15. At this transporter workers manually separate any impurities, which for some reason were not separated by the machine. All that did not pass through the 11 screen (glued beans and large admixtures) is sent to the 13 inclined channel and out of the car.
As for small beans and impurities, which passed through a sieve 9, they arrive at the lower tier and here sieve area 10 separated from the smaller impurities that are removed from the machine via 16 cone, and then moving to the sieve portion 12, separated from larger impurities that enter 18 cone, and hence the inclined chute of the machine are displayed. Freed from impurities small beans, similar to the move in 12 sieve chute 20, and passing over the magnets are applied to the control conveyor 14. Under sieves arranged with reciprocating translationaltion MOVE brush 17, which are free of holes sieve trapped grains. 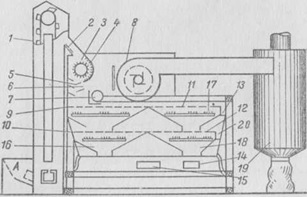 8 fan entrained dust and light impurities are sent to a cyclone 19.
Performance sorting machine with dvuїmya qualifying conveyors up to 900 kg / hour.
Due to the fact that the machines with flat sieve under the influence of the reciprocating movement in the base sieve or ceilings, which are installed on the machine (having variable voltage, the latter must necessarily be taken into account when calculating the overlap strength.
The number obtained by sorting the cocoa beans and Wastes loss is primarily depending on the thoroughness of cleaning the beans after fermentation and drying.
The results of the definitions of waste and losses during sorting are shown in Table. 3.

On the basis of these data, matching the data years of practice work of our chocolate factories, the following rules can be taken (in%):
Out of pure, assorted beans 98-98,5%
Output stuck together and broken beans. 1%
Irreversible loss (garbage, dust and other impurities) 1-0,5%
Glued and broken beans are roasted whole beans separately from and after roasting the beans are added to the sorted and sent along with them for further processing in the grits.