Physical and chemical changes in the bean during roasting
Sorted cocoa beans fed to roasting.
During roasting, a number of physical and chemical changes occur in the beans, of which the following can be noted: the moisture content decreases; The volatile substances contained in the beans are removed, mainly those that have an unpleasant odor and taste, for example acetic acid; The bitter-astringent taste of beans is softened to a great extent, mainly by changing tannic substances; Develops a fragrance; The coloring of beans improves; Shell cocoa beans becomes fragile and the ability to easily build from the core; The core also becomes brittle and easily crushed.
Changing bean moisture during roasting

Content vlaїsh in unroasted beans varies (within 6-8%, and roasted bobahot to 2 3%. In certain parts of the cocoa bean moisture is evenly distributed.
Data Table. 4 give an idea about the changes in the moisture content (in kg) in various chastyaіh beans during roasting based on that whole beans contain 87,5 12,5%% core and shell.

Thus, the moisture content of the roasted beans is
(2,2*100)/(91,8+2,2)=2.34 %.
The closer the moisture content of the roasted beans, and consequently in the obtained nibs are lower limits, the more effective grinding grits on the grinding apparatus, the thinner the obtained cocoa mass and more successful processes occur pressing and separating cocoa butter.
The optimal process for the preparation of chocolate mass and the quality of the finished chocolate and chocolate is the content of the roasted beans and cocoa mass about 2% moisture.
When the moisture content in the roasted cocoa beans 1% below the technological properties deteriorate grated chocolate and cocoa mass. Reduces the degree of grinding and the yield cocoa butter during pressing.
Shell the cocoa beans after roasting under the influence of a weak pressure can be easily removed from the kernel. The roasted beans and cocoa nibs are obtained characterized by their ability to absorb moisture from the surrounding air. The higher the relative humidity, the greater the amount of moisture absorbed by the beans and crumbs. 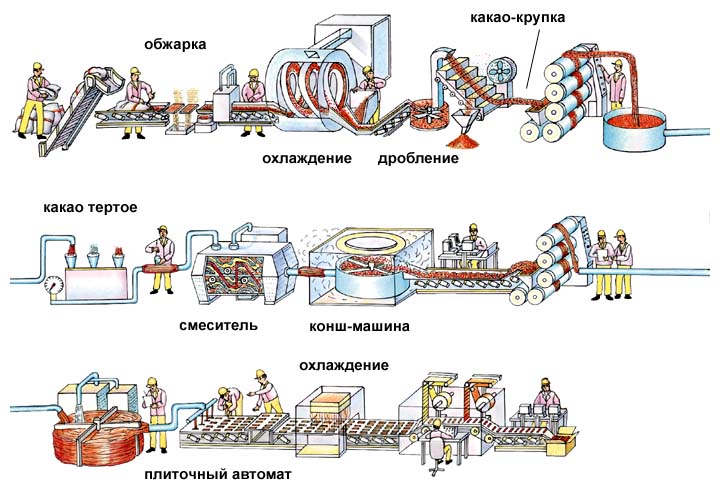 Observations were made on the change in the moisture content of the roasted cocoa beans and Krupka, stored in desiccators, under conditions of different relative humidity and at room temperature. The results are shown in Table. 5.

Data for moisture change and cocoa bean grits (in%) during storage under normal conditions in the workshop room, in which the relative humidity was about 65%, a temperature of about 18 °, are shown in Table. 6.
Table 6

The data confirm the indications made above that obtained roasted beans and cocoa nibs from which absorb moisture from the surrounding air. In connection with gigroskropichnostyu cocoa beans and grits it is recommended not to allow the accumulation of reserves in the production of the roasted bean grits, and send them for further processing steps.
Changes in pH and removal of volatiles
And cocoa beans contain a certain amount of volatile matter, reporting the chocolate an unpleasant taste and smell. This unpleasant odor is easy to see when you open the cork in the bank, in which the beans are stored for a long time.
Tests showed that the different varieties of cocoa beans contain volatile acids (% by weight and acetic acid)
Accra 0,5 to 0,16
S-Tome from 0,30 to 0,72
Arriba, 0,5. 0,1
Bahia, 0,25, 0,33
Trinidad, 0,17. 0,20
We conducted trials to establish the number of volatile acids changes occurring in cocoa beans during their roasting Akra showed that the content of volatile acids unroasted beans is 0,4%, while beans after wiping 0,3% (calculated as acetic acid). When this change was omecheno and titratable acidity (expressed in acetic acid) in unroasted beans - 0,92%, and fried - 0,67%.
Removal of volatile acids in frying due to the loss of sumi substances within 0,1-0,2%