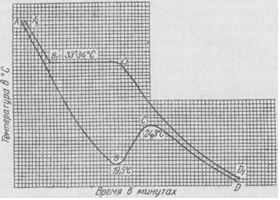 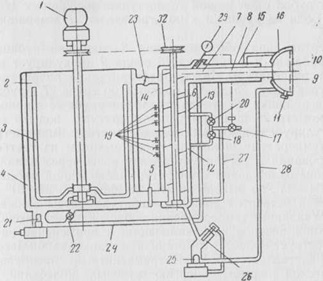 Fig. 38. Driving the four-tempering machine with acoustic vibrator.
The best effect is achieved in tempering machines, which with the help of sound vibrations produced
homogenization of the chocolate mass. In these machines provides four cooling zones.
Driving the four-tempering machine with acoustic vibrator shown in Fig. 38.
The chocolate mass is fed into a tank with an agitator 2 3 and 4 shirt. From the tank the chocolate mass through a pipe with
Іlslonkoy 5 6 enters the screw. The motor rotates the agitator 1 and 32 from the yoke through the drive transmits the motion to the auger.
Moving up the peg and then the pipes and the 7 8 9 to the nozzle, the mass passes mgtyre tempering zone. First
zone has a shirt 12. Here along the pipe through the 17 and 18 gate valve incoming cold water. of the valve tube bifurcates and its upper branches through the valve sent water 20 13 shirt in the second tempering zone.
Used water is removed for connection with stopcock 19. Opening the valve in one or the other challenge, adjust the height of the column of water in the jacket. The higher the water column, the better the cooled chocolate mass.
21 heater is used to heat water circulating in the jacket 4 2 tank. Part of the used water is returned to the heater on 22 pipe, and the other part through the pipe with the valve 23 14 shirt comes in third 7 zone. Water from the shirt to the heater back on 21 24 pipe.
The fourth zone of tempering 8 is equipped with a shirt 15. In this shirt and in the 16 shirt 9 nozzle circulates water of constant temperature. The water preheated by the electric heater 25 to 30 ° is fed through the pipe 27 into the shirt 15 and further into the shirt 16, from which it flows along the pipe 28 to the heater. The 26 thermometer records the temperature of the water and, at the same time, regulates the supply of current to the heater. The 29 thermometer indicates the temperature of the chocolate before leaving the third tempering zone and regulates the water supply through the 17 valve. In the first cooling zone, the temperature of the chocolate mass is reduced to 34-33 °, after leaving the second zone - to 32-31 °, and then in the third and fourth zones, the temperature of the mass decreases to 31-30 °. This tempering determines the intensity of the formation of crystallization centers, and the use of the 11 vibrator promotes the process of homogenization of the chocolate mass. The vibrator is an electromagnetic converter of electrical energy into the energy of sound vibrations. The cooled chocolate mass, passing through the 10 9 nozzle grid, is filtered and sent to the molding. If filtering devices are not provided in the design of the tempering machine, they must be included in the total flow of processing the chocolate mass by installing filters between the tempering and forming machines.
To filter the chocolate masses, glazes and other viscous fluids successfully used a mechanical filter is a continuous design and Smolyanitsky Fuerst.
In fig. 39 shows a diagram of the operation of a filter operating under pressure from a rotary pump pumping liquid. The filter consists of a welded body 1, a rotating mesh cylinder 3 and a knife 5. The liquid to be filtered enters the body 1 through the inlet pipe 6. Having passed through the mesh cylinder 3, the filtered liquid is drained through the pipe 2. The sediment released on the cylinder surface is continuously removed with the knife 5 and goes into a sludge pocket, from where, as it accumulates, it is discharged outside.