COCOA BEANS
GRADE cocoa beans
The main raw material for chocolate production Cocoa beans are the seeds of the cacao tree (Theobroma Sasa L.), which grows in the tropical belt of the globe.
In the literature there are indications that some wild cocoa tree instances are found north of the tropics. The origin of the cocoa beans are divided into
3 group.
1. US (about 35% of world cocoa bean Obora): Arriba, Trinidad, Grenada, Please select a Zip Rico, Cuba, Bahia, and others.
2. African (60%): Accra, St. Tome, Cameroon and others.
3. Asian (1,5%): Java, Ceylon, and others.

COCOA FERMENTATION BOBOV
The fruit of the cocoa (Fig. 2) consists of a membrane with a thickness of up to 15 20 mm and a reddish-yellow pulp, inside which there are five (longitudinal rows of up to 25 40 almond seeds (beans).
Extracted from the pulp of the fruit of the cocoa beans have a pronounced bitter astringent taste, and grayish-purple color 3 break.
In order to improve the taste and to facilitate separation of the pulp from the seed of the fruit after extraction from fermented and dried. Fresh seeds are put in the boxes height of about 1 m and top are covered with banana leaves to preserve liberated during fermentation heat. Sometimes the seeds simply folded in a heap on the ground.

The pulp that wraps around the seeds contains sugar, which is easily fermented under the influence of yeast that penetrates from the surrounding air. As a result of fermentation, the sugar turns into alcohol and carbon dioxide, and the fruit pulp liquefies and is easily separated from the seeds. Along with yeast fermentation, complex enzymatic processes occur in beans due to the presence of enzymes in beans: diastase, invertase, catalase, protease, raffinase, oxidase and peroxidase.
By the end of the first day of fermentation, when the temperature reaches 32 — 33 °, the beans are mixed well for uniform fermentation in all layers.
By the end of the second day of fermentation, when the temperature of the beans reaches 37 — 38 °, they are mixed again. By the end of the third day, the temperature reaches 45 — 50 °. By this time, due to the bacterial oxidation of the alcohol, the fermentation becomes acetic. Depending on the bean variety, the fermentation is continued for another one or two days, after which the beans are dried, most often by the sun. For this purpose, the beans are scattered in a thin layer and mixed from time to time, which ensures uniform drying.
The fermentation takes place a number of changes in the properties and chemical composition of the beans.
The color of the cocoa beans with the changes, changing from white to violet or brown, or brown-red. 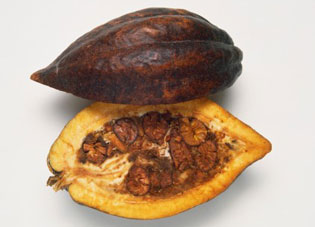 Fig. 2. Cut the cocoa fruit.
Along with this, (a result of changes in the composition and properties contained in the beans of tannins significantly softened the bitter and astringent taste After fermentation the beans have seen the development of the characteristic aroma;.. Cocoa bean core becomes more fragile, shell acquires the ability to easily separate from the kernel contained in seed embryo loses its ability to further activity.
According to research, after six days of fermentation West African cocoa beans varieties Amelonado amount of tannins is from 9 40% to the original.

In tabl1 presents data on changes in the chemical composition occurring in the seeds of the cocoa bean fermentation and during their subsequent drying.
From this table it is seen that a significant amount of moisture is removed from the fermentation and drying of the beans; reduced content of nitrogen compounds and carbohydrates; reduced content of tannins, which is accompanied by

softening the bitter and astringent taste of beans. Noteworthy is a noticeable increase in the number of beans organic acids (tartaric and acetic).