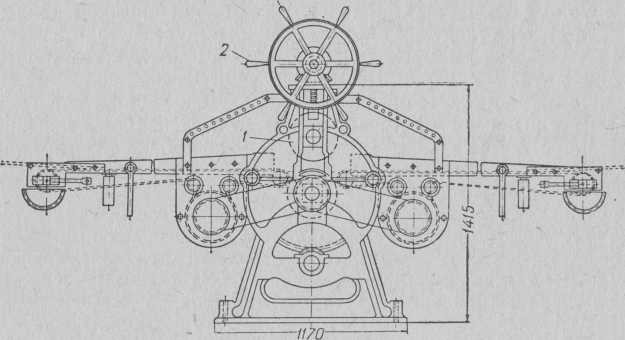 Fig. 86. Shaft Machine for rolling dough:
1 - rolls, 2 - the steering wheel to adjust the gap between the rolls.
rolling with scraps, it is commonly referred to as facial. There are no differences in the design of these machines. The front double-roll machine is in line with the die.
For sugar dough, instead of twin-roll machines, sometimes a dough extractor is used, which consists of two corrugated sliding steel shafts, above which a funnel is located. The dough, loaded into the funnel, under the action of its weight and thanks to the flutes is captured by the shafts and is forced into the box under the shafts. Steel strips are inserted into the bottom of the box with a cut-out in the form of a solid slot or with a cut-out of a smaller size, but with a diverse contour. The dough is squeezed through a slit or cut in the form of a solid dough tape or a series of narrow strips that go directly under the grinding rolls of the stamp. The test press machine usually makes up a single unit with a die.
Maturing test. Immediately after kneading and rolling, the dough is subjected to aging: pieces of dough are laid on the table, covered with a tarpaulin and left to lie for a certain time. Tarpaulin is used to preserve the temperature of the dough and protect its surface from the formation of a crust, which worsens the condition of the surface of the cookie.
The dough on the tables should not be diluted with thick plates, since this can lead to its self-heating and, as a consequence of this, to the premature decomposition of ammonium carbonate and a decrease in the plasticity of the dough.
From practice it is known that the properties are improved by maturing protracted test. This dough is rolled more easily, the dough pieces after forming almost do not change its shape, and baked goods have a pleasant appearance and a uniform porosity in the fracture.
As a result of kneading and rolling, the dough is subjected to a strong mechanical action of the kneader blades and rolls. When kneaded, the integrity of the gluten threads is disturbed, and during rolling they undergo plastic deformation. During the curing process, the internal stresses in the dough occurring during the kneading and rolling process are resorbed. As a result of aging, the viscosity of the dough decreases, and the plasticity, i.e., the ability of the dough to maintain the shape given to it during the molding process, increases sharply. Changing the properties of the dough as a result of dogging has a positive effect on the quality of the cookies: the brittleness, swelling and porosity of the products increase.
Research has established the ability to achieve optimal plasticity of the dough without properly curing it, by making some changes in the technological mode of production and processing of the dough. Increasing the temperature of the dough during rolling increases the plasticity of the dough and reduces its viscosity. If you knead the dough at a temperature of about 40 ° C and roll it at a temperature close to the batch temperature, then the dough will have optimal plasticity - the same as if the dough were subjected to a two-hour curving. These conditions can most accurately be fulfilled with continuous dough kneading, when the dough with the optimum temperature is immediately transferred to the rolling and does not have time to cool.
Moulding dough. The dough is molded on various machines and accessories depending on the structure and consistency of the dough.
The most common machine for forming dough, especially long-lasting, is a percussion punching machine.
A light-type die-type die (fig. 87) is used to form a long and flat dough, the purpose of which is rolling dough, cutting out blanks of a certain shape from a dough tape and placing them on sheets or metal kiln conveyors.

Two pairs of grinding rolls first give a certain thickness and width to the layer of dough. Cutting blanks from a dough tape is carried out by a stamping mechanism, which consists of a matrix in the form of a glass with pointed edges and a punch moving inside the matrix. A punch in the form of a plate with pins inflicts punctures on the surface of the cut dough piece and pushes it out of the die. Punctures of the blanks are necessary for free release of water vapor in the baking process, since otherwise swellings are formed on the surface of the cookie. A small number of punctures in the dough for cracker contributes to the formation on the surface of products blisters characteristic of this type of products.
The stamping mechanism for sugar dough is different in that there is an engraved pattern or inscription on the surface of each punch. At first, the punch is strongly pressed against the surface of the dough and puts on it a drawing or an inscription, then the matrix cuts the dough pieces of a different contour.
The transfer of the test tape to the grinding rolls and from the rolls to the punching mechanism, and then to the laying mechanism, is carried out by a system of conveyors.
Felled test forcooking with the help of a mechanism is automatically arranged in the right rows on metal sheets or on a belt samorasklad if the blanks go directly to the three-belt furnace.
Dough trims obtained in the molding process are transferred by conveyors to a double-roll front machine.
The quality of products largely depends on the precise work of the punching mechanism. Particular attention should be paid to adjusting the pressure of the punch so that a clear pattern is formed on the surface of the dough and at the same time the dough cannot be compacted if the punch is pressed too hard. Adjustment is carried out by approaching the punch and the cushion, which is under the stamping mechanism. The cushion and the punching mechanism must be strictly parallel. Failure to comply with these conditions can lead to too deep cutting of the dough tape and to cut the canvas with a strong pressure of the punch or to carry away the dough pieces, along with the cuts under weak pressure.
Sugar dough is currently being molded on rotary machines (fig. 88). Along with this, rotary machines at a number of enterprises began to be used for molding sandy pastry dough. These machines are distinguished by their uncomplicated construction, small dimensions, high productivity and the absence of dynamic loads during operation.

A rotary machine consists of a corrugated drum and a rotor, on the surface of which there are engraved grooves with outlines corresponding to the contour of the products. The dough from the funnel, located above the grooved drum and rotor, is captured by them as they are rotated and pressed into the rotor cells due to the grooves of the drum. The knife, located between the grooved drum and the rotor, fits close to the rotor and cleans its surface from the dough. The dough pieces are extracted from the rotor cells by the presser drum of the receiving sheet at the moment of its contact with the rotor. The dough sticks to the canvas and is transferred to the stencil located on the second conveyor belt, or directly to the oven tape.
When forming sugar and shortbread dough on a rotary machine, keep in mind the following. The dough adhesion force to the rotor cells should not exceed the adhesion forces of the dough particles to each other, otherwise the dough cannot be completely removed from the rotor cells. The force of sticking of the dough to the receiving sheet must exceed the forces of sticking of the dough to the rotor cells.
The position and condition of the blade during operation of the machine has great influence on the dough forming conditions. Knife must fit snugly to the rotor wall, since otherwise the dough will not be completely cleaned from the rotor surface and the resulting dough layer between the knife and the rotor will contribute to the premature ejection of the dough from the rotor cells. From the same considerations one should not allow chipping and residues of dried dough on the edge of the knife.
The filling of the rotor cells with dough depends on the position of the knife and the distance between the grooved drum and the rotor, which are usually adjusted depending on the type and properties of the dough. The higher the knife position, the weaker the pressure experienced by the dough, which can lead to insufficient filling of the rotor cells, as a result of which the dough can not be removed from the cells. With a very low knife position, due to the strong pressure experienced by the dough, the rotor cells overflow with dough, and the pressure drum flattens the excess dough; As a result, agnails are formed around the molded dough and baked cookies.
Recently, a constructive solution has been found to the process of forming a protracted dough by a rotation mechanism.
It is impossible to mold the dough directly from a piece of dough, since it has the ability to almost completely restore its shape after deformation. Therefore, the formation of a dough test with a rotary mechanism can be carried out only after repeated rolling of the dough and from a previously prepared dough tape.

The concept of rotationThe one-sided mechanism for forming a protracted dough is shown in fig. 89. The pre-prepared dough tape is first pressed by the 1 roller to the 2 conveyor belt in order to increase the adhesion forces of the dough to the conveyor and thereby eliminate the deformation of the dough pieces. During the passage of the dough tape and the molded dough on the conveyor, the internal stresses causing the dough to shrink are partially absorbed, as a result of which the shortening of the dough pieces along the length is already slight.
Then the dough sheet passes under the shape of the rotor 3, which cuts the tape test piece. 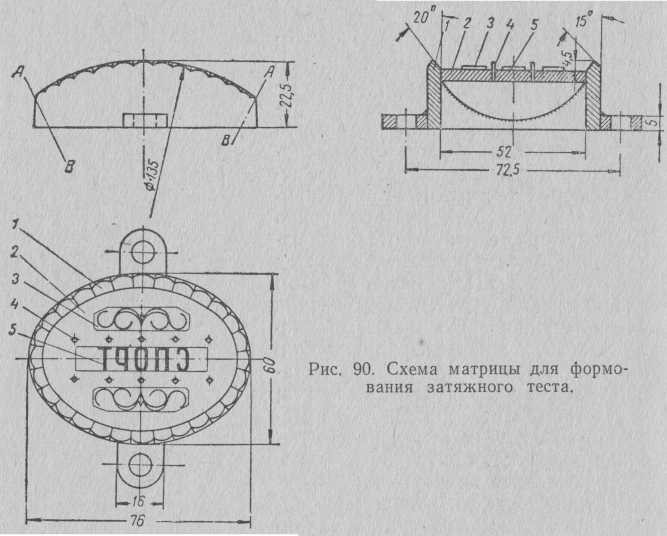 At the time of forming the dough, the conveyor belt rests on the 4 roller, covered with a soft cloth.
The forming rotor is a four-sided shaft, on which 7 matrices, bent of iron bar, are strengthened (fig. 90). The cutting edges of all the dies are located in bulk in a single cylindrical surface. Diameter of the forming rotor 135 mm. An 2 bottom is welded into the body of each die, to which stencils are attached with 3 pattern and 5 lettering, as well as 4 studs for piercing the moldable dough
Whipped butter biscuit varieties is deposited on pressmashinah (Fig. 91) or type ACF machines (Fig. 92). 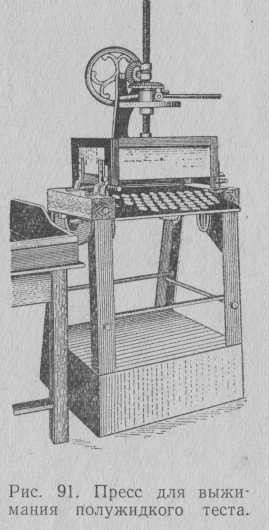 Forming dough on the machines FAK as follows. After kneading, the dough goes into the funnel of the machine, from where two corrugated rollers located under the funnel, rotating towards each other, are captured and pumped through the mouthpieces of a diverse contour.
Squeezed dough of certain outlines is detached from the mouthpieces by a movable table at the moment of contact of the dough with it.