The synthetic food colors - are organic compounds which are not naturally occurring, i.e. synthetic. Almost all of them have been used for decades in the global food industry.

Synthetic food colorants, in contrast to natural, do not possess the biological activity and do not contain flavoring agents or vitamins. However, they have considerable technological advantages as compared with natural, because the process is less sensitive to processing and storage conditions, and provide bright color legkovosproizvodimye. 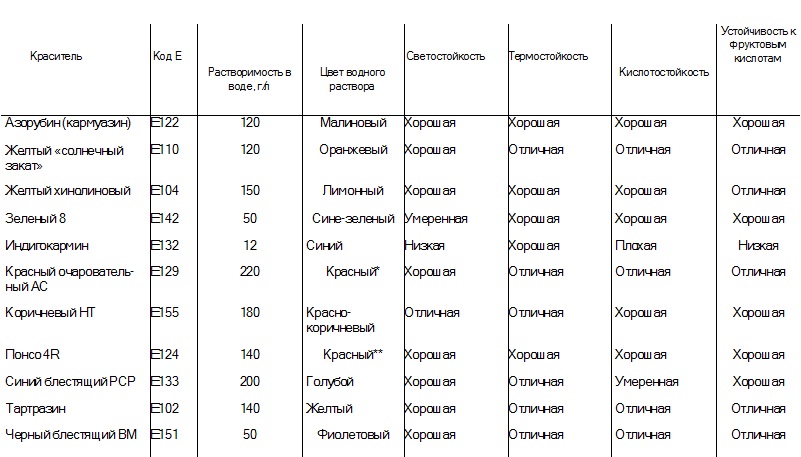 Synthetic food colorants are water-soluble organic compounds. They are available in the form of powders or granules. When using powdered synthetic dyes, especially on large plants, there are some problems. When weighing, pouring and other technological operations, they are dusted, while contaminating the surface of equipment work clothes, floors and walls of the room and increasing the loss of the dye. The solution to this problem is the use of granular dyes [166]. Preparations of synthetic food colorings generally contain 80-85% of a basic dye, but can also be manufactured with a filler (sodium chloride (salt salt), sodium sulfate or sugar). The content of the main colorant in such commodity forms, as a rule, ranges from 75 to 40%. Sometimes 1 sale there are aqueous solutions of dyes [134].

All natural and some synthetic food colors do not form soluble complexes (varnishes) with metal ions (usually with aluminum). With the dye content in them is 10-40%. Typically, paints are used in the form of fine powders.

Stabilizers (locks) staining retain natural color of food: their products in processing and storage of unwanted or slow change of color. A number of herbal products used in the manufacture of air conditioning Terek products prone to browning. Two types of enzymatic browning and non-enzymatic should be distinguished.

Enzymatic browning substances cause brown, forming schiesya on reactions catalyzed by enzymes. For instance, polyphenoloxidase; catalyzes the oxidation of mono- and ortodifenolov to quinones, of which in what follows are formed oxidation brown pigments. Enzymatic browning products are subject to the processing of fruits and vegetables, especially svezhenarezanny for further processing fruit. To prevent enzymatic pobu renie, you must destroy or inactivate the corresponding enzymes used for this purpose:

A prerequisite is the presence of enzymatic reactions co-factors, which perform the role of the free metal ions (magnesium, zinc, kal tions, iron, copper or molybdenum). If the ions are transferred to the chelated form, sol-soluble complexes, or other non-reactive form district enzymes also will work. These processes are referred to as masking (sequestration). Good sequestrants include citric acid, citrates, etilendiamintetra- acetic acid (EDTA) and its salts, various phosphates and polymeric tartaric acid.

Brownish non-enzymatic reactions called the whole group including the formation of carbonyl intermediates, as well as polymer brown pigments. This group belongs to the well-known Maillard reaction - the interaction of reducing sugars with amino acids. This reaction proceeds advantageously in products with a water content of up to 5 10% even at room temperature and is accelerated by heating.

To reduce the tendency to non-enzymatic browning during storage and processing products better suited reductants such as sulfur dioxide and sulphites. Their effect can be enhanced by the reduction of temperature and water content below 4%, water activity, pH (addition of acids: malic, ascorbic, citric, acetic, lactic or tartaric) and changing the recipe, for example, replacement of non-reducing reducing sugars.

Sulfur dioxide, sulphurous acid and salts thereof prevent both enzymatic and non-enzymatic browning of foods. In contrast to other reducing agents, they have the ability to rapidly penetrate the cell membrane, thus acting more effectively. During the processing of the fruit processing sulfur dioxide or sulphites conducted during blanching, B0 residue2 removed by washing.

Substances that are color stabilizers, exhibit and other action, in fact, usually it is the main technological feature of the substance. Thus, sulfur dioxide and sulfites - primarily antioxidants and preservatives, citric acid and tartaric - acidifiers.

Bleaches (bleaches) prevent and eliminate unwanted coloration of the product (e.g., flour) by chemical reaction with the components thereof.

Chemically, it is oxidizing or reducing agents. Action oxidants (peroxides, hypochlorites) based on the isolation of active chlorine or oxygen, which react with the product undesired coloring substances by converting them to non-colored compounds. The action of reducing agents (sulfur dioxide, sulfites) is to slow down the processes of enzymatic and non-enzymatic browning.

The substances are bleach, exhibit and other action. Furthermore, the bleaching action is usually regarded as a side. So, most oxidants and are primarily preservatives and reducers - antioxidants.

Used for bleaching oxidizers destroy not only undesirable colorants, but other useful including food ingredients,