Amplifiers of taste and aroma.

Amplifiers (modifiers) of taste and flavor enhance taste perception and stimulate the endings of taste nerves. First of all, they include bonucleotides, substances that are contained in a relatively large amount in the amount of harvested vegetables, fresh meat, fish and other products that have a pronounced taste and aroma. The content of natural nucleotides in the food product; reaches several hundred milligrams and even grams per kilogram. In the process of storage and industrial processing of food raw materials, the number of nucleotides in them decreases, which is accompanied by a weakening of taste and aroma. Therefore, there is a need to add these substances from the outside. This technique has been used for centuries in the countries of the Far East, and only in 1908, it was discovered that the component used in Japan as an intensifier of soups, sauces and other products is a salt of glutamic acid - L-monoglutam (glutamate) sodium . Later, other flavor and flavor enhancers were identified and identified. Disodium-621'-inosinate (Е5) and disodium-631'-guanylate (Е5) have the highest "taste effect" among them.

Formed with caramelization of sugar and being an integral part of caramel maltol (E636) has the property of enhancing sweet taste. It is found in milk, burnt sugar and malt, needles of coniferous trees, chicory, bread crust. If the methyl group is substituted for ethyl in maltol, we get a compound called ethylmaltol (E637) and has a "gustatory strength" of 4-6 times that of maltol. Maltol and ethylmaltol enhance the perception of a number of flavors (especially fruit and cream). Maltol also enhances the sense of sweetness of saccharin and cyclamate and eliminates their undesirable after-taste

Several intense sweeteners at a very low dosage (1-2 mg / kg), etc. are the effect of enhancing the flavor and aroma. Vanillin and ethyl vanillin Flavours enhance fruit and chocolate flavors. Table salt is also a taste modifier. It not only gives the food a salty taste, but it has the property to enhance their sweetness and bitterness masking and metal. Sometimes it is called flavor enhancer for the poor.

Sweeteners are added to foods to give them a sweet

taste. They can be used to produce low-calorie diet foods, whole or in part devoid of carbohydrate. Due to the absence of glucose fragment sweeteners they do not require insulin to digest and can be used in the manufacture of products for diabetics.

Sweeteners are classified into intense sweeteners and sweeteners. Intense sweeteners - non-sugar substances - are tens and hundreds of times sweeter than sugar. Among natural sweeteners, thaumatin (E957) and stevioside (E960) are the best known. Thaumatin is found in the mature fruits of the African catemfe tree (Thaumatococcus danielli), it is several hundred times sweeter than sucrose, and is used in special varieties of chewing gum. Stevioside is found in the leaves of the stevia plant (Stevia rebaudiana). It is 100-300 times sweeter than sucrose. The stevia leaves themselves are also used as a component of spicy mixtures or green tea. Neohesperidin dihydrochalcone (E959) and sucralose (E955) can also be conditionally considered natural. Neohesperidin dihydrochalcone is a chemical modification of naringin, a bitter substance in grapefruit peel. The sweetness of dihydrochalcone neohesperidin is highly dose-dependent and can range from 2000 to 330, while it has a menthol flavor. Sucralose is produced by chemical modification of sucrose and is the only sugar-derived sweetener. Sucralose is 600 times sweeter than sugar.

Among synthetic intensive sweeteners, sweeteners of the "old" and "new" generations are distinguished. To the "old" generation include cyclamats (E952) and saccharin (E954) in the form of acids or salts. Cyclamates in 30 times sweeter than sugar, saccharin - in 450-500 times. These sweeteners are known for a long time, and it was they who created the reputation of sweeteners in their time as substances with an unpleasant aftertaste, metallic taste, and even frankly bitter. In addition, in a number of countries they are completely or partially prohibited, since the opinions of specialists on their harmlessness diverge. The "new" generation of sweeteners aspartame (E951) and acesulfame K (E950) are much better than "old" in taste and harmlessness. Both representatives are 200 times sweeter than sugar.

Factor, showing how many times sweeter than sugar substance, called an indicative factor of sweetness tocl. For sugar Kcl taken equal to 1. In determining the rate of sweetness compared to the sweetness of the test substance solution and th 9% sugar solution. Power of sweets - candy factor - is not a constant value and can vary widely.

It depends on several factors: the concentration of the sweetener, food acidity, temperature, presence of other flavoring substances, particularly sweet.

Sweeteners (sugar substitutes) give the food and food ready sweet taste, as well as perform other processing functions of sugar. By virtue of sweetness, they are not very different from the sugar, and with increasing concentration factor increases the sweetness of sugar substitutes. Chemically, they are polyalcohols (polyols). Saharozamenitelya- E are as fructose and glucose, not relating to food additives. 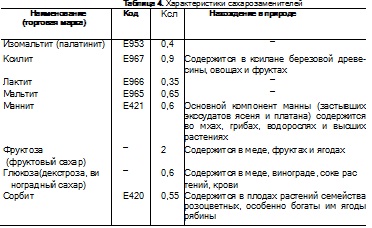 The profile of the taste of sweeteners does not completely coincide with the profile of the taste of sugar: sweetness may come later or earlier, persist longer or disappear almost immediately, have stronger or weaker tastes than sugar. Therefore, in order to obtain a profile of sweetness that is close enough to the sweetness profile of sugar, real products usually use mixtures of intense sweeteners with each other or with sugar substitutes. In addition, when mixed, sweeteners often exhibit synergy (mutual enhancement of sweetness), which allows them to achieve their savings. For example, 320 mg of a mixture of equal parts of aspartame and acesulfame K have the same sweetness as 500 mg of each of these sweeteners individually.

Acid acidulants (acidifier) ​​cause the sour taste of the food product. As flavoring substances are used inorganic and organic acid salts of certain acids, for example tartrates, glucono-delta-lactone.

In aqueous solutions, acids are capable of dissociation, splitting into ions: positively charged protons and negatively charged acid residues. Dissociation takes place in different ways. The degree of dissociation depends on the acid composition, the degree of dilution and temperature. According to the degree of dissociation, acids are divided into strong (for example, hydrochloric or sulfuric) and weak (for example, acetic, coal and most fruit acids). The acid strength is proportional to the concentration of hydrogen ions in its aqueous solution. The measure of acid strength is pH-negative logarithm of proton concentration:

In neutral solution [H+] = 10 7, respectively pH = 7. If pH <7, the solution has an acidic reaction. Strong acids have 0 <pH <3, weak acids have 3 <pH <7. The concentration of hydrogen ions, expressed by the pH value, is called "active acidity". A sour taste can be expected in a food product having a pH <4,5. In principle, the sensation of sourness is proportional to the concentration of hydrogen ions, but in reality everything is more complicated. Acids, in addition to sour, can have their own taste, for example, citric, or they can have pure sour, such as phosphoric. Therefore, solutions of different acids with the same pH can be subjectively perceived as different in taste. The intensity and duration of the sour taste also varies greatly from acid to acid.