In the confectionery industry for coloring products (caramel, candy, dragee, marmalade-pastilla, some flour confectionery) used dyes that are harmless in terms of food.

Of the natural dyes are used (in limited quantities) carmine and safflower. Some other harmless natural dyes (chlorophyll, malvin, saffron, orleans, juices of edible berries - cranberries, raspberries, currants, etc.) can also be used to tint food products, but they are not used in the confectionery industry.

For dyeing a product, three dyes are enough — red, yellow, blue. The desired color is obtained by mixing in certain ratios of two (or three) dyes. To get green, you should mix yellow and blue dye, orange - yellow and red dye, etc.

Food synthetic dye amaranth (C20H11O10N2S3Na3), produced in the form of a paste, is obtained by cleaning technical dye acid red С and is used to tint food products in red. Molecular Weight 604,27. 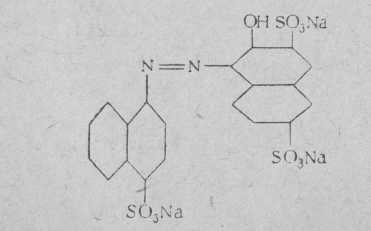 dinitrosulfo-alfantol. It turns out cleaning technical naphthol-yellow dye (paste) and is used for tinting food in yellow. Molecular Weight 358,10.

Indigo Synthetic Food Dye - Carmine (C10H8O8N2S2Na2), produced in the form of a paste, is disodium salt of indigo-disulfonic acid. It is obtained from indigo by sulfonation with strong sulfuric acid and is used to tint food products in blue. Molecular Weight 466,18.

Preservatives are substances that protect products from damage caused by microbiological processes.

In the confectionery industry, preservatives are used for fruit and berry preparations (fresh fruits and berries, pulp, mashed potatoes, etc.).

The public health authorities in the USSR allowed two preservatives, benzoic acid and sulfuric acid. Salicylic acid and its compounds, formic, boric, and hydrofluoric acids can also be used as preservatives, but because of their harmful effects on the human body in the Soviet Union, their use is prohibited.

Especially should be allocated preservatives related to antibiotics derived from micro-or macro-organisms. These include penicillin, biomitsin, etc. They have a bactericidal effect, causing the death of microorganisms. Phytoncides have the same effect - substances (discovered by Tokin) found in onions, garlic, radish and many other plants.

Byenzoinaya kislota (C6H5COOH) can be used in canning fruit and berry blanks. It has a significant bactericidal effect, especially on yeast, in products with a low content of nitrogenous substances and with an acidic

reaction, optimally — at pH 2,5 — 3,5. The usual dose, sufficient for preserving applesauce and other fruit and berry preparations, about 0,1%. In finished food products — marmalade, pastila and other confectionery products (provided that apple sauce is included in the recipe along with other components — sugar, molasses, etc.) - no more than 0,07% of benzoic acid is allowed.

If benzoic acid enters the human body in small doses with food, it does not have a harmful effect, since it does not linger in it. It reacts with one of the common amino acids - the glycocol - and turns into hippuric acid, which is formed in the kidneys and excreted from the body with urine. The reaction goes by the equation

Benzoic acid has a molecular weight 122,13, melting point 122,5 °, boiling point 250 ° (sublimates above 100 °). Small crystals of monoclinic system of white color. Solubility in water - 0,30 parts in 100 parts of water (at cold), dissolves well when heated; in alcohol and ether dissolves well.

The sodium salt of benzoic acid is distinguished by good solubility in water - the 63 parts in the 100 parts of water. Therefore, when preserving fruit purees, especially with high acidity, they prefer to use sodium benzoate, rather than benzoic acid. The free acid contained in the pureed mash is displaced from the sodium benzoate in a free form by benzoic acid, which is weaker than the acid of the fruit.

Benzoic acid can produce some compounds and derivatives, which also have a preservative effect, sometimes even stronger. These include: esters of benzoic acid - ethyl, propyl, etc., parachlorobenzoic acid (C6H4ClSOON). Its sodium salt (C6Н4S1SOONa) is called mikrobin and is stronger than benzoic acid, preservative properties against molds.

Sulfurous acid H2SO3 widely used as a preservative for fruit and berry blanks. It has a strong bactericidal effect on both yeast and mold. The usual dose of acid, sufficient for preserving applesauce and other fruit and berry preparations, 0,10 — 0,12%. For some types of fruit and harvesting, this dosage should be increased, for example, to 0,15% — for black currants and apricots, 0,20% for strawberries, raspberries and cherries.

Sulfuric acid is more harmful for the body (in the same dosages) than benzoic. It is not excreted from the human body and, as it is consumed, it accumulates in the body (it has a cumulative effect). As a result, significantly lower dosages than benzoic acid are allowed in food products - no more than 0,002% in terms of SO2 (No more than 20 mg SO2 1 kg of finished product). Most of the sulfurous acid contained in the semi-finished product (fruit and berry harvesting) is destroyed during thermal processing (cooking, drying).

Sulfuric acid is formed when sulfuric anhydride is dissolved in water: SO2+ N2O → H2Total sq3 (Table. 103).

* For preserving fruit preparations, 3 — 6% aqueous solutions of sulfurous acid are usually used. The concentration of sulfurous acid in the solution can be determined not only chemically, but also with the help of a hydrometer - by specific weight (Table 104).

The sulphurous acid canned foods has not only purely bactericidal (the microflora), and in the chemical action. Sulfur dioxide has regenerative properties, oxidized to sulfur trioxide:

The use of sulfuric acid as a preservative favors the preservation of the color of the preserved product during.

Sulfurous anhydride is usually obtained by burning sulfur. It is stored in metal (cast-iron) cylinders, where it is in a liquid state under pressure. Sulfuric acid solution is obtained by passing sour gas (formed when opening the gearbox — reducing the pressure to atmospheric pressure) from a cylinder through rubber hoses in a bottle of water or in barrels. According to the sulfitometer installed on the cylinder with sulphurous anhydride, they are measured (by volume of liquid ES) and the amount of sulphurous anhydride is released through a hose, which is required to obtain the desired concentration in bottles or barrels of sulphurous acid.

According to the standard, sulphurous anhydride, which is used for food preservation, should be sufficiently clean and free from impurities ", especially arsenic,

Ground talc is used in confectionery production as an auxiliary material for making caramel and dragee. Talc is not moistened with water, its addition reduces friction (slip increases) of the products - drops, caramel - and sticking of the caramel mass and products.

Talc is a mineral approaching the chemical composition of the formula 4SiO2 • ЗМgО • Н2A. Talc usually enters as a main component in the rock — talcite, which is subjected to grinding, to obtain commercial ground talc. Talcite deposits are found in different areas, the largest - in the Urals (Miass), in Armenia, Karelia.

Talc has the form of scaly slate aggregates with a clearly defined frivolous cleavage. May be white, greenish or yellowish.

In the production of talc, depending on the degree of purity (the amount of impurities), the starting material (talcite) and the method of processing, talc is obtained of four grades: A, B, C and medical. For confectionery production is talcum brand A of high purity, it has an additional label "food". Talc grade A must have a guaranteed high whiteness: Grade I - whiteness not less than 80% (compared to the brightness of the barite plate), Grade II — not less than 70%.

The main properties of talc are as follows. With ordinary calcination, it loses little in weight, no more than b — 8%, its melting point is about 1200 °. Moisture of ground talcum powder (grade A) - no more than 0,5%. Very little soluble in acids and alkalis. According to the standard I, a grade A grade talc after calcination and treatment with hydrochloric acid should give a residue (in% to taken) at least 87% (for grade II, this indicator is not normalized).

Talc usually contains some impurities: iron (in the form of oxides up to 6 — 8%), manganese, nickel, calcium (less than 1% CaO), etc. In grade A talcum, the content of these impurities is very low, according to standard it is not standardized. The absence of arsenic impurity in talc is important for the confectionery industry: according to the standard, no more than 0,0014% is allowed.

Paraffin is a mixture of the Cathedral of saturated hydrocarbons methane series of the general formula CnН2n + 2. Paraffin is extracted from the heavy fraction of oil (paraffin oil), as well as from products obtained by dry distillation of brown coal, combustible shale, from coal and peat tar. For confectionery production is further purified paraffin.

As a limiting hydrocarbon, paraffin is very resistant to chemical reagents, does not oxidize, and does not go rancid. Acids, alkalis, oxidants have no effect on paraffin.

Beeswax is used in the confectionery industry as an auxiliary material. It is an indispensable component of the “gloss” for confectionery coating and is often found in lubricants, for example, for boilers and basins, into which caramel mass is poured, and for caramel molding machines; These lubricants are used to eliminate the sticking of the caramel mass.

Wax has a complex composition, it includes: esters of acids (palmitic, cerotinic and melissinic) and monohydric alcohols (ceryl and myricyl); the number of esters in wax is about 70 — 75%; saturated hydrocarbons are in the amount of 12 — 15%; free acids - in the amount of about 15%.

Wax is a solid with a granular fracture, white or more often yellow in color with a peculiar, slightly aromatic odor. When heated, it first melts, then becomes viscous and ignites (at 242 — 250 °), it burns with a luminous flame.

The wax is dissolved in ether, gasoline, benzene, acetone, amyl alcohol and other solvents for fats. In the molten (heated) state it mixes (mutually dissolves) with vegetable oils, fats and paraffin. The wax is not soluble in water and cold alcohol.

Due to the low iodine number of beeswax is resistant to chemical changes, oxidation, it does not go rancid.

Wax is obtained by peretaplivaya honeycomb with water (crude wax). For cleaning and bleaching wax, solar bleaching is used or the treatment of molten wax with adsorbents (for example, animal charcoal). Freshly bleached wax is not colored; it turns yellow in the air after a while.

Some waxes can be used in confectionery production for the same purposes as beeswax, as well as as components for the preparation of food lacquers (for chocolate figures, for coating foil, cellophane, etc.).

Vegetable waxes include carnauba wax (collected from the leaves of a Crypha cerifera L. palm tree grown in South America). The main component of it is the ether of myricyl alcohol and cerotinic acid. Melts at 83 — 86 °, solidifies at 80 — 81 °. Soluble in alcohol (boiling) and ether. Palm wax that covers the trunk of a palm tree (Сroxylon оndiо1а). Melts at 102 — 105 °. Soluble in alcohol and ether.

Of waxes of animal origin, spermaceti has special significance for confectionery production. It is obtained from a variety of sea whales, sperm whales, who have fat in their upper part of their heads. After extraction from the sperm whale, the fat is subjected to melting, then when cooled, the liquid fraction is separated from it - spermaceti oil and solid - spermaceti. Spermaceti clear, exposing the processing of a weak alkali solution.

Spermaceti as the practice of production shows, is a valuable component of the "gloss" that goes for drazhirovanija.