Saflor Carthamus tmctorius, Is one of the oldest crops. It is believed that this species came from southeast Asia, but was long cultivated in China, the Middle East and North Africa. Safflower was brought to the United States by immigrants from Spain and Portugal. Until recently, the history of safflower was associated almost entirely with the use of its flowers, from which the dye cartamine was extracted. Later, the introduction of other, more stable, dyes displaced this use of safflower. Safflower was a relatively insignificant oilseed crop prior to the beginning of the 1950, when varieties with a higher seed oil content were harvested, and safflower oil was used for protective coatings. Part saflorovogo It includes oils mainly linoleic fatty acid with a very low content of linolenic, whereby it is almost perfect drying oil. Interest in the ability of unsaturated liquid oils to lower cholesterol levels in the blood serum catalyzed the development of food grade saflorovogo oil. 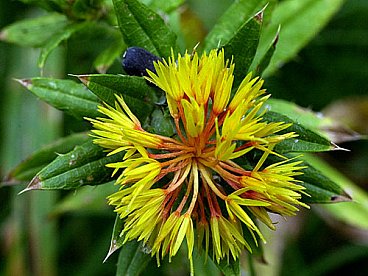 Safflower seed oil is obtained squeezing or solvent extraction. It occupies a special position, because it has the highest content of linoleic (C18: 2) Fatty acids, for best commercially produced oils. Typical characteristics saflorovogo oils are shown in Table. 1.13. 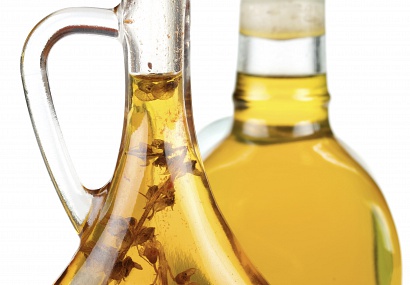 Safflower oil is attractive to consumers seeking a healthy diet. Linoleic acid, the main component of the fatty acids saflorovogo oil refers to an irreplaceable, t. e. can not be synthesized in humans. It is necessary to ensure the integrity of the plasma membrane, growth and reproduction processes, functioning of the skin and other organs. Also of interest is a beneficial effect of conjugated fatty acids on human health. Their potential therapeutic properties is anticarcinogenic, antiateroskleroznoe impact growth activation in low weight gain. Safflower oil is a raw material for production of natural conjugated linoleic acid (conjugated linoleic fatty acids — CLA).

months of normal storage. Thus, obviously, safflower oil, with its high level of linoleic acid and low levels of natural antioxidants is not highly resistant to oxidation.

Safflower oil is used in food products, it is desirable where a high content of polyunsaturated fatty acids. It is used in mayonnaise, salad dressing and liquid margarine, and was originally used as a fat base for soft margarine filler. taste stability was a constant problem for those products that contain considerable amounts of saflorovogo oil due to its high content of linoleic acid. Hydrogenated safflower oil easily on conventional processing equipment. Hydrogenation improves the oxidative stability and ized hydrogenated safflower oil can be used in margarine or shortening fat base for replacement in the conventional β-crystal form. However, the oxidation stability of hydrogenated saflorovogo oil is much lower than soy or corn oil, hardened to the same extent.

The natural mutation of the safflower plant, discovered by researchers at the University of California at Davis, makes it possible to obtain an oil in which the usual contents of linoleic and oleic fatty acids are interchanged (i.e., high oleic content in oil instead of linoleic acid). Consequently, the oil has a significantly improved oxidation stability compared to conventional safflower oil due to the replacement of polyunsaturated chains with monounsaturated ones. An additional advantage of this safflower mutation is that plants and seeds can be offered at the same price as ordinary safflower in connection with a wider climatic range of growth. The fatty acid composition of both high-aline and high-oleic varieties of safflower was surprisingly constant under different temperature conditions. Small variations of both varieties were an increase in the content of oleic acid at higher growth temperatures and an increase in linoleic acid content - at lower growth temperatures. These results show that both varieties saflorovogo oil should provide a very homogeneous and stable products, regardless of the crop year.

The composition and physical properties of high oleic saflorovogo Oil

High oleic safflower oil kept light in color and flavor normal saflorovogo oils, but oxidation stability (induction period) as measured by the active oxygen, increased three and a half times.

The relationship between the degree of lipid unsaturation and their susceptibility to oxidation is well known. In the early studies of the kinetics of fatty acid oxidation, a different rate of oxidation of linoleic and oleic fatty acids was noted. The lower oxidation rate of oleic and saturated fatty acids was the main reason for the hydrogenation of the oil. Elimination of one double bond in the fatty acid significantly increases the resistance to oxidation. The use of natural oils that are rich in oleic acid excludes certain side effects of hydrogenation, such as a change in taste and the formation of trans-isomers of fatty acids. Evaluation of suitability for frying

showed nysokooleinovoe that safflower oil is an excellent frying oil. In control trials, it resist oxidation and polymerization better than hydrogenated shortening 1651, the stability of potato chips was quite acceptable and similar to the stability of the product, roasted on gidrogenizirovashyum oil. This oil can be used in all areas where you need highly stable liquid oil (the same direction, that are offered for high-oleic sunflower oil).