Substances that regulate the consistency.

Emulsifiers are added to food products in order to create and stabilize emulsions and other disperse systems. The action of emulsifiers is multifaceted. They are responsible for the mutual distribution of two immiscible phases, the consistency of the product, its plastic properties, viscosity and a feeling of "fullness" in the mouth. Emulsifiers, which create conditions for the uniform diffusion of the gaseous phase into liquid and solid media, are called foaming agents. Emulsifiers added to liquid whipped products to prevent foam sagging are called foam stabilizers.

Emulsifiers possess surfactant properties, that is, concentrating on the surface of the immiscible phase interface, they can reduce the interfacial tension. Thus, the terms "emulsifier" and "surfactant (surfactant)" as applied to food ingredients can be considered synonymous.

Edible dispersions (dispersions) are heterogeneous systems of two or more immiscible phases with a surface area therebetween. One of the phases forms a continuous dispersion medium, the volume of which is allocated to the discontinuous phase in the form of fine solid particles, droplets or bubbles. Disperse systems with particles larger 10-4 See commonly called coarse with particles of 10-5 to 10-7 see - highly dispersed or colloidal. Systems with a gas dispersion medium called aerogels and aerosols, with a liquid - emulsions and suspensions. Systems with gaseous dispersed phase - foams.

In the food industry most common emulsions consist of water and oil: straight droplet of the nonpolar liquid in a polar medium (such as "oil in water" - M / V), and reverse or invert (type "water in oil" - B / M). A typical example of a direct emulsion food - butter cream, reverse - margarine. Changing the composition of the emulsion, or external influence could lead to the direct conversion of the emulsion in the opposite, or vice versa. This process is called "inversion (treatment) phase."

Foam is a fine dispersion of air in a liquid or solid. To form a foam, and can exist in the system requires the presence of surface-active substances - foamers. These substances often perform the role of foam stabilizers.

Food emulsifiers, foaming agents and foam stabilizers are organic compounds with surface-active properties. Their molecules have a diphilic structure, that is, they contain lyophilic and lyophobic (usually hydrophilic and hydrophobic) atomic groups. Hydrophilic groups ensure the solubility of surfactants in water, hydrophobic (usually hydrocarbon) at a sufficiently high molecular weight contribute to the dissolution of surfactants in nonpolar media. At the boundary of the phases, the diphilic molecules are oriented energetically in the most favorable way: hydrophilic groups - towards the polar (usually aqueous) phase, hydrophobic - towards the nonpolar (gas or oil) phase. Thus, an interphase boundary layer is formed, due to which the surface tension decreases and it becomes possible or facilitated the formation of emulsions. The effect of emulsifiers does not end there. Due to the formation of spatial and electrical barriers, they additionally stabilize the emulsions, i.e., prevent the already formed particles of the disperse phase from re-adhering and re-delamination. Frothers and foam stabilizers are mainly located on the surface of air bubbles, forming there a strong film that strengthens the resistance of bubbles to sticking. In fat-containing foamy masses, for example, in whipped cream, emulsifiers are located on the surface of fat globules [58]. They provide a better distribution of fat and simultaneously reduce the antagonism of fats and proteins due to the "hydrophilization" of the fat surface. In addition, they contribute to the necessary partial agglomeration of fat globules (demulsification).

The main physical, chemical and technological properties of surfactants are determined by the so-called. hydrophilic-lipophilic balance (HLB) of their molecules. HLB reflects the ratio of the molecular weights of hydrophilic and lipophilic groups. The HLB value can range from 1 to 20 (Griffith's empirical scale). Emulsifiers with HLB <10 are predominantly lipophilic, while those with HLB> 10 are predominantly hydrophilic. The more HLB, the more clearly the ability of the surfactant molecule to form and stabilize direct emulsions (O / W), the less HLB, the more clearly the ability to form and stabilize inverse emulsions (W / O) is manifested. Emulsifiers with an HLB value from 7 to 9 can be used as wetting agents (wetting agents), characterized by an HLB value of 15 to 18 - as solubilizers (substances that promote the formation of colloidal solutions). Hydrophilic-lipophilic balance is an additive value, i.e. The HLB of a mixture of emulsifiers can be calculated by adding the HLB of the components in proportion to their content in the mixture. An emulsifier (or a mixture of emulsifiers) accelerates the formation and stabilizes the type of emulsion in the dispersion medium of which it is more soluble. For example, margarine is a water-in-oil emulsion, therefore emulsifiers with an HLB value of 3-6 are used to obtain it. Butter cream is an oil-in-water emulsion; emulsifiers with HLB 8-18 are used for it.

As the first food emulsifiers used natural substances. Typical and oldest emulsifiers are egg white and yolk, natural lecithin, saponins (for example, soap root broth). All of them have more or less kept their popularity in the production of confectionery, however, in the industry, synthetic emulsifiers or products of chemical modification of natural substances are widely used, the industrial production of which began to develop in the 20-ies. The last century. The purpose of the chemical modification of natural emulsifiers is to change their hydrophilic-lipophilic balance, for example, the HLB of lecithins can be changed from 2 to 10 (Table 5). Accordingly, their behavior in food systems also changes. Since HLB is an additive value, by mixing several emulsifiers it is possible to obtain emulsifying systems whose behavior is very different from the behavior of the components [58]. For example, hydrolysed lecithins (HLB 8) in mixtures with other emulsifiers can have an HLB value of 12. The HLB value may depend on the pH of the medium: for example, in neutral and alkaline HLB environments, ammonium salts of phosphatidyl acid (E442) are markedly higher than in acidic ones. The most popular food emulsifiers are mono-and diglycerides of fatty acids (E471), glycerol esters, Fatty and organic acids (E472),

Lecithin is a classic "natural" antioxidants and emulsifiers in the egg, cream and butter.

Lecithin is a mixture of phospholipid fractions. The composition of the usual purified (fat-free) lecithin includes phosphatidylcholines (23%), phosphatidylinositols (19%), phosphatidylethanoamines (21%), phosphatidylserines (15%). In addition, there are trademarks with an increased content of individual fractions, including phosphatidylcholine. Therefore, lecithins can fulfill the emulsifying function of the egg yolk, which allows to reduce the consumption of egg products in the formulations of confectionery. In the amount of 2-10 g / kg of lecithin can perform all the functions of the emulsifiers described above. Small heat resistance (shaking) and a tendency to hydration (formation of turbidity) do not create great hindrances for the use of unmodified lecithin in confectionery production. 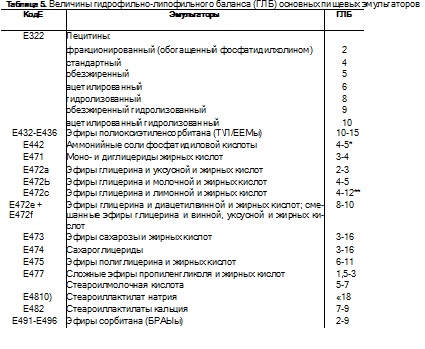 * In an acidic environment. In neutral and alkaline much higher. ** HLB ranges from 4 in acidic medium to 12 neutral.

Despite the fact that egg yolk lecithin is extremely rich, particularly phosphatidylcholine, the primary source of industrial production are soybean lecithins.

There are various ways of modifying lecithins, as a result of which the HLB value can be significantly altered. The range of application of modified lecithins is broader than that of "native". For example, the introduction of aceto groups increases the thermal stability of lecithin, esters of citric and lactic acids change its emulsifying power and increase the ability to spread and complex, thus enhancing the antioxidant effect. The technological and commercial success of enzymatically hydrolysed lecithins in the food industry is due to their exceptional emulsifying properties in oil-water systems.

Commonly used coemulsifiers lecithins are mono- and diglycerides of fatty acids. Usually they are mixed in proportions 1: 1, 1: 2,1: 3, 2: 3.

Mono- and diglycerides are relatively inert substances and in most cases are used only in an activated form, for example in the form of a powder, spray dried on a suitable carrier or hydration. In most cases there are only monoglycerides. Solid (saturated) monoglycerides improves overrun and foam stability, while unsaturated fatty acid monoglycerides act rather as anti-foaming agents.

Virtually the only area of ​​application of ammonium phosphatides (E442) is the production of chocolate.

Atsetozhirami are glycerides and natural fatty acids having an even number of carbon atoms from C2 to C18 and acetic acid. Since atsetozhiry contain only saturated fatty acids, they are resistant to oxygen and light, as well as resinification and rancidity, but easy to split off acetic acid. They are unlikely to have an emulsifying effect, but may affect the crystal structure and plasticity of fats act as a lubricant, separating agent, to form a solid, hold tight and resistant to fracture coatings and films.

Lactic acid glycerides are excellent emulsifiers when whipping of three-phase systems and facilitate whipping dough, margarine for baking, desserts. But their use is limited to foam products with a short life. Due to the tendency to hydrolysis, they only powdered products can be used long-term storage.

Emulsifiers, referred to as E472e and E472 £ (DCK-esters BATEM), it is impossible to discern any in the analysis or in use. They are a mixture of esters of glycerol with fatty molecules, tartaric acid and acetic acid, and tartaric acid can be esterified further 2 glyceride molecules. The area of ​​use - almost exclusively bakery.

Sucrose esters of fatty acids and sucroglycerides consist of normal foodstuffs: sugar, fat or fatty acids - and would be ideal food emulsifiers, if not two disadvantages. Firstly, their production is very complicated; requires costly removal of byproducts, solvents, and catalysts that greatly increases the cost of the product. Secondly, sucrose esters very sparingly; their use requires the presence of solvents.

Monoesters greatly reduce the surface tension between the oil phase - water, they are good emulsifying systems "oil in water". Di- and triesters less hydrophilic and do not dissolve neither in water, nor in oil.

Esters of fatty acids and sorbitol (SPANs) do not create such problems in dissolution and production, as sucrose esters of fatty acids E473. Esters of sorbitan with 1-3 fatty acids have sufficient solubility (dispersibility) in food systems. SPANs with 2-3 fatty acids act as emulsifiers in water-oil systems, mono-esters, on the contrary, stabilize oil-water emulsions, in both cases phase reversal is possible. The stability of SPANs to hydrolysis is sufficient for food systems. Thermal stability is also good. Main areas of use: cookies, muffins, whipped cream and other whipped foods, baking fats, chocolate and glazes.

Polyglycerol esters of fatty acids and have sufficient for use in aqueous systems, hydrolytic stability and thermal effects that allow to subject them to boiling and sterilization, but polyglycerol esters are unstable against lipophilic enzymes.

Separate the polymerization of fatty acids and glycerol followed by esterification leads to the formation of nonionic, relatively high molecular emulsifiers E476 - polyglycerol esters - and vzaimoeterifitsirovannyh Riemann tsinolovyh acids (ROR11). They remarkably strong influence on the surface tension of oil in the system - water and oil - the fat crystal.

For E476 have two different applications:

1) as an emulsifier and separator in separating emulsions, sprays and waxes for lubricating bakery dishes, baking trays, as well as forming and stamping machines for confectionery products;

2) to reduce the viscosity of tempered chocolate masses during grinding, rolling and conching, as well as for better shaping. PBP11 is also well suited for thin but dense and durable chocolate glazes (coatings).

The thermally oxidized soya bean oil (E479) used in separating emulsions and waxes. Since it contains oksistearin oil may also be used as a defoamer.

Free stearoilmolochnaya acid is difficult to machine due to the high melting range. Lactylate (E481, E482), on the contrary, well grind to a stable powder.