The machine is designed to wrap soft glazed and unglazed candies in a twist in three wrappers: a rolled label, foil and roll; The machine is installed in production lines and automatic wrapping of sweets. 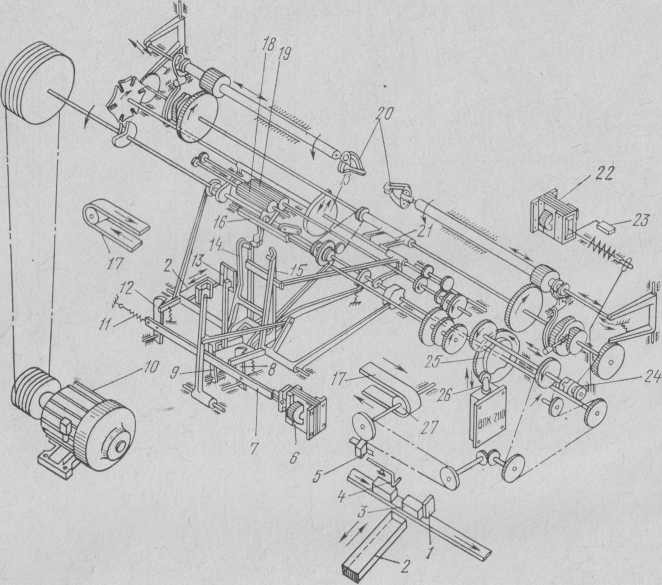 The conveyor-feeder 17 (Fig. 10.8) is driven by the pulley 27. The 3 candy entering the wrapping is fed with a 17 belt feeder up to the 1 stop. Perpendicular to the movement of the candy, the 2 pusher is located, and the 13 damper is installed on the opposite side. It performs reciprocating motion in a vertical plane. When supplying the product to the pusher, the flap is in the upper position at the level of the conveyor-feeder guide and prevents the product from being skewed. At the same time, the steel 18 and the rubberized 19 rubber wrapper feed rollers are rotated. The 2 pusher then passes the 3 candy to the wrapping rotor grippers. At the same time, the 13 damper is lowered by the time it enters the grippers, the rotating 16 knife cuts off the wrapping material and the 2 pusher delivers candy to the rotor grips along with the wrapper. The 13 damper bends the bottom flap around the candy, and the upper flap bends the fixed rail. To fix the cut wrapper on the candy and keep it in a fixed position before serving, the spring-loaded lever stops with 14 and 15 slats, which are located opposite the 2 pusher, serve as rotors.

The rotor has six pairs of legs (grips) and periodically rotates 60 °, each time bringing a new pair of legs into the position for pushing candy into it.

The wrapping rotor moves the candy wrapped around the perimeter from four sides to the position where the ends of the wrapper are placed opposite the 20 twirl heads. They grab the ends of the wrapper and, spinning, twist them on 1,5 — 2 turns. In addition to rotational, the heads also have a translational motion: when the twist wraps the heads get closer. This eliminates the possibility of breaking the wrapper on the product. The wrapped candy is removed from the grips of the rotor with an 21 ejector pusher onto the bypass conveyor or into the inline container.

The start of the pusher movement (cycle time) at which the presence of candy is controlled by the stop 1 is determined by the position of the cam 25 controlling the end switch 26. The limit switch has two pairs of contacts. Pressing the candy to the stop much earlier than the start of the working cycle will not cause the 6 electromagnet to be de-energized, since at this moment the upper contacts of the 26 limit switch blocking the probe contacts are closed. Only at the time of the 2 pusher stand, the 25 cam breaks the upper pair of contacts, de-energizing the 6 electromagnet, and the 11 spring pulls the 8, 9, 12 latches. Thus, the pusher mechanism is unblocked. The 25 cam and the 26 limit switch provide locking and unlocking of the pusher mechanism at the same time in the cycle.

In order to avoid a shift in the cycle of the moment of opening of the 24 clutch when the shaft turns due to inertia, the 5 shoe brake is installed on it (see fig. 10.7).

ZKCA automatic machines can be operated in the candy production line with their supply from the feeder, which is a system of trickle conveyors (by the number of automatic machines in the line), as well as separately outside the line from individual (manual and mechanical) feeders. The individual manual feeder is a fixed table adjacent directly to the conveyor of the feeder of the machine.

The individual mechanical feeder А2-ШПШ (UkrNIIprodmash design) consists of two consecutive feeding conveyors, a narrow transverse conveyor and a vertical conveyor installed above it (overall dimensions of the feeder (in mm) 795X770X910; weight 240 kg; performance - by machine). In the group feeder candy come from the enrobing machine; in individual feeders candy served by the operator.

When the machine is installed in a line (Fig. 10.9, a), candy A from the 1 feed conveyor, to which the machine is mounted at 90 ° or another angle, is rotated by the 2 rotating guide, fenced by the moving 3 guide, to the 4 feed conveyor automat. Candies that arrived at the feeder conveyor in position on the rib are laid flat on the 5 brush or dropped from the conveyor through the lower sections of the 6 guides. Candy on the feeder conveyor should come already oriented on the long side.

When feeding the machine from an individual manual feeder (fig. 10.9, b), candy A is oriented from the 7 table by the operator directly to the conveyor of the machine's 5 feeder. 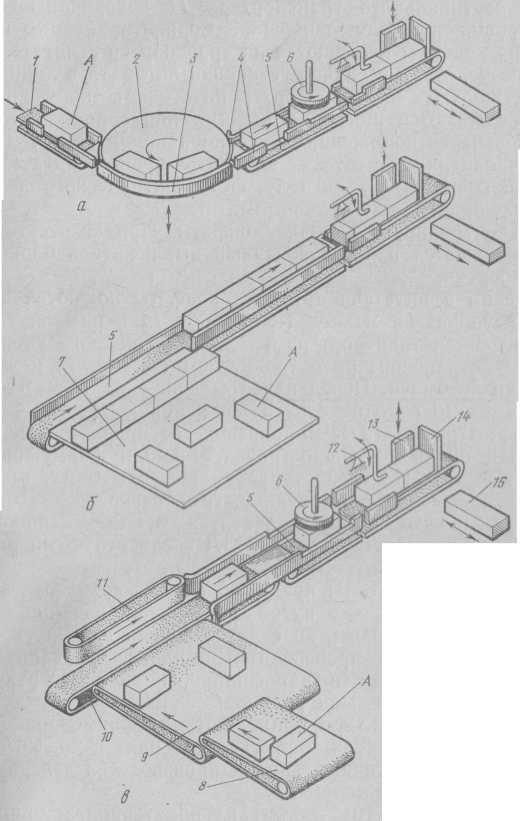 a - from the line; b - from an individual manual feeder; c - from individual mechanical feeder А2-ШПШ

served on the second feed conveyor 9. Since the speed of the latter is much greater than the speed of the first, intervals are created between the candies. Sweets, coming to the 10 cross conveyor, under the action of friction on its surface and movements of the vertical 11 conveyor turn the long side in the direction of travel. Directed sweets are transmitted to the 5 conveyor of the machine feeder. Just as in the case of installation of the machine in line, candies that arrived at the feeder conveyor in position on the rib are laid flat with the 6 brush or dropped from the conveyor through lowered sections of the guides.

The 12 lever controls the availability of candy. In its absence, it turns and locks the wrapper feed through the limit switch.

Wrapping unit ISL. In the production of toffee and candy caramel, molding-IZL, Futurus, and others found wide distribution, in which the rope is continuously formed, cut into individual products and automatically wrapped. In the USSR, the Kievprodmash plant produces an IZL unit with IZM-1 and IZM-2 automatic machines.

The unit with an automatic machine IZM-1 is intended for the production of an “Golden Key” type of iris by molding articles of iris weights and wrapping with two-way twisting of the ends of the wrapper; the wrapping is made in a waxed roll and label or in a waxed roll, foil and label, fed from the rolls.

The unit with the machine IZM-2 is used for molding and wrapping Teatralnaya type candy caramel, etc. The unit is installed in production lines for the production of wrapped toffee or candy caramel.

Car break-ASO-2. The machine is designed for the molding of the Gladden (or caramel) harness weight, calibration and feed it into Wrapping Machine. 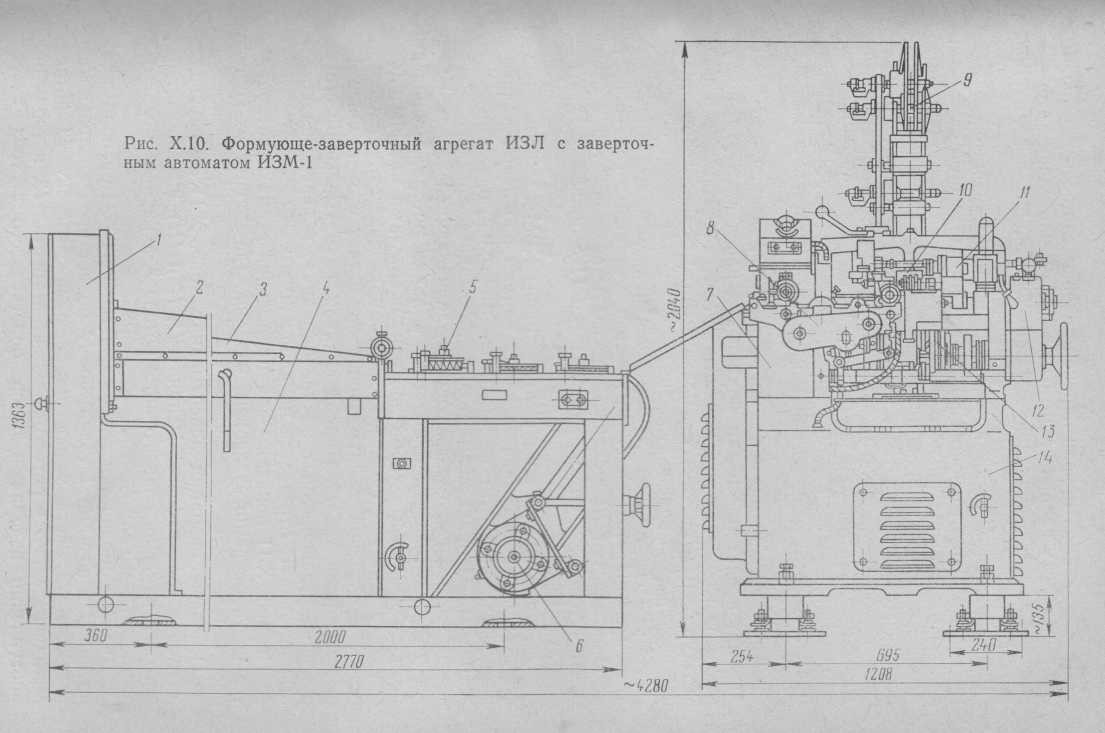 The trough is mounted steam coil for heating the mass. The coil on top covered with a protective screen, through which a coil is prevented from entering crumbs formable mass.

The rolling machine has two drives - spindle assemblies and a mechanism for rolling rollers. The spindle drive is carried out from the individual electric motor through a V-belt drive and spur gears. The rollers of the first and second rolling receive movement through the cylindrical gears from the gear of the third rolling roller. The diameter of the harness regulate from 18 to 25 mm.

Calibrated to the desired diameter of the harness molded on the tray weight is continuously supplied to car-wrapping machine.

Iris-forming-wrapping machine IZM-1. The machine is designed to form an iris from a harness coming from a KRM-2 rolling machine, wrapping it in a roll, foil and label, fed from reels, with double-sided twisting of the label ends.

The toffee bundle coming from the KRM-2 grinding machine is molded and rolled in two pairs of rolling rollers, acquiring a rectangular shape in cross section (12 X 10 mm). Periodically, articles 25 mm long are cut from the molded toffee harness with a rotating knife. Each product is pushed in the paws of the rotor. Since a wrapping material (label paper, foil, binder) passes between the product and the rotor, the product enters the rotor with the wrapper wrapping it from three sides. The wrapping material is fed by a pair of rollers, unwinding it from rolls mounted on three reels, and at certain intervals cut off to a length of 52 mm.

In fig. 10.11 shows a schematic diagram and sequence of operations for wrapping a product (before twisting the ends of a wrapper).

The main wrapping operations (fig. X.11, a) are carried out in three working positions (I, II and III) of the six-position vertical wrapping rotor 2, fixed on the horizontal shaft 1.

The 1 shaft is periodically rotated by 60 °. When the 2 rotor is in position I, the 11 pusher feeds the product previously cut from the 9 harness to the lower sponge 13 of the rotor. Between the product and the rotor is a wrapper 12, which, when the product enters the pototo, fits it from three sides (fig. 10.11, b, c). Then the movable sponge 6 of the rotor clamps the product with a wrapper, and the 14 bending tool bends the lower edge of the wrapping material (Fig. 10.11, d). When turning the rotor 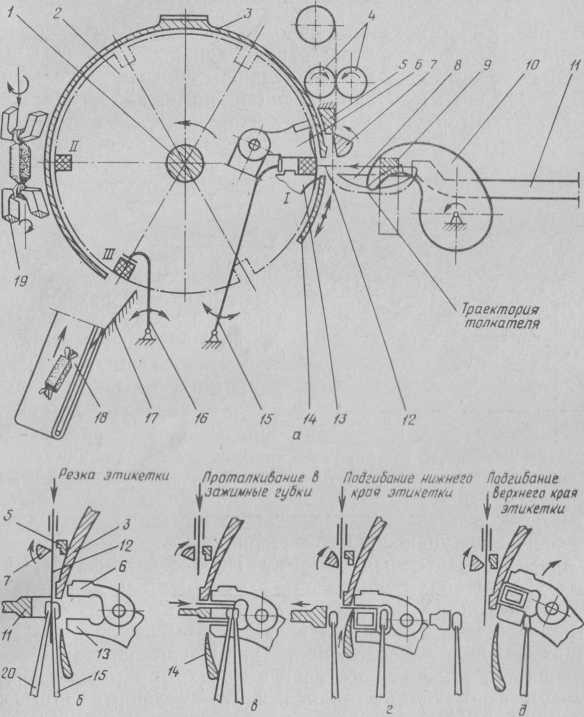 a — working positions of the rotor; b, c, d, d - the sequence of wrapping in position I of the rotor

the upper edge of the wrapping material is folded, bumping into stationary plate 3 (Fig. 10.11, etc.).

In position II, the ends of the wrapper are captured by continuously rotating 19 legs, which, as they are twisted, come closer together to avoid breaking the ends of the label. In position III, the wrapped product is fed by an 16 ejector onto an inclined tray / 7, from which it rolls onto the 18 selection conveyor. When the 11 pusher pushes the cut piece into the rotor, the harness rests against the 10 rotating blade. Subsequently, the pusher returns to its original position, bypassing the fixed 8 table below, on which the product was moved.

Fig. 10.11, b shows the working bodies to facilitate the entry of products with a wrapper in the rotor: a guide frame and frame clamp 15 20 wrapper (the latter is shown only (p \ IP H.11, b, c, d, e) Guide frame 15 periodically.. and exits the rotor reaches 12 wrapper. to it a pusher 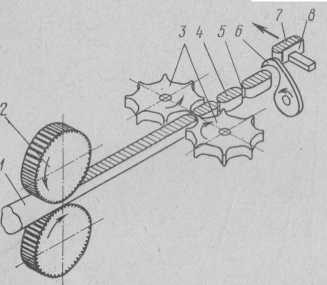 11 presses the wrapper and product, which are then jointly inserted by the pusher and frame into the rotor.

The protruding edges of the wrapping material are pressed against the 15 guide frame with the 20 hold-down frame. Wrapping materials are supplied by continuously rotating po

7 knife and 5 fixed knife. The cutting edge of the fixed knife is inclined, which improves the cutting process of the packaging material.

The Izm-2 caramel wrapping machine differs from the Izm-1 machine in the design of the feeder. Feeder for caramel tow (Fig. 10.12) works as follows. The rope 1 caramel mass is fed into the gap of a pair of vertical forming rollers 2 of the first rolling. Upon leaving the gap, he turns into a tape that enters the gap between the horizontal 5 forming rollers, each with eight teeth. The teeth of the rollers are one against the other. They pinch the tape, shaping 4 products from it, interconnected with 5 jumpers.

The thickness of the lintel must not exceed 1 mm. Forming rollers push the chain of products so that the jumper is under the rotating 6 knife. It cuts a single 7 product, which the 8 pusher moves to the rotor for wrapping.

Productivity wrapping machines (in kg / h) is determined by the formula

where n is the frequency of rotation of the rotor, rpm; z is the number of grips on the rotor;

If we take normalized stops and interruptions in the machine during the eight-hour shift equal to 0,5 hours (30 minutes), the shift performance of a single wrapping machine (in kg per shift) will