In order to avoid the allocation of crystals of fat and sugar on the surface of chocolate products (“bloom” of chocolate), the mass is subjected to tempering before molding, to be cooled with vigorous stirring. For this purpose, use automatic screw tempering machine. When leaving the car, the chocolate mass has a temperature 31 ... 32 ° С -

Tempering machines come with horizontal and vertical cameras that have two, three or four cooling zones. Moving through the zones, the chocolate mass is cooled to 30 ° С with continuous stirring. This ensures the transition of cocoa butter from an unstable form to a stable one and prevents the fat from graying on chocolate.

Three-and four-zone machines on the principle of operation and the device are the same, but differ in the cooling system. The tempering process in these machines occurs continuously, in a very thin layer and with vigorous stirring. Each particle of chocolate mass, before it leaves the tempering chamber, goes a long way and acquires the temperature required by the process conditions. Thanks to special devices (contact thermometers and solenoid valves that regulate the flow of cooling water to each zone), the tempering machines are automatically maintained

The performance of machines can be varied over a wide range with the help of a continuously variable speed variator. The mixing body, the auger, creates pressure ensuring the displacement of the sealed mass through the pipeline to a distance of 25 m.

A tempering machine with a vertical chamber (Fig. 5.34) consists of a receiving tank, a two-zone vertical chamber, a return pipe, a water communications system and a control panel.

The receiving tank 6 is equipped with a water jacket, into which cold or warm water can be supplied through 32 and 33 screws. 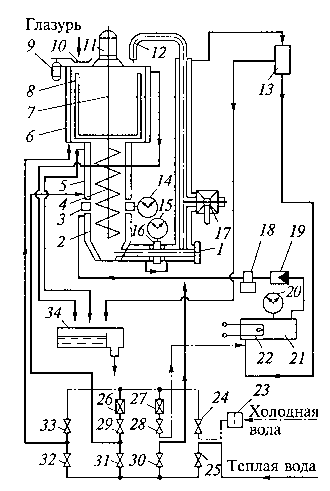 Sensors transmit signals to 14 and 75 thermometers, indicating the temperature of the chocolate mass at the end of the zone.

The machine is equipped with a tank-mixer 27, which is supplied with hot water and water coming from the second zone through the overflow tank 13. If necessary, the signal from the 20 thermometer turns on the 22 heater. From the mixer to the second zone, water is pumped through the 18 pump through the 19 check valve.

Before starting, the car is warmed up, for which manual control of the supply of warm water is provided in water communication. Through the open valve 25, warm water enters the jacket of the receiving tank of the machine zone with the valves 30 ... 32 open. The valves 24, 28, 29 and 33 are closed at the same time. Water from the zones is discharged into the tank 34.

After warming up, the machine is fed chocolate mass, which is pre-filtered through an 10 grid, which is driven in an oscillatory motion from an 9 vibrator motor. If the temperature of the chocolate mass is above 50 ° C, cold water is manually put into the tank shirt through the 33 valve. If the temperature has dropped, warm water is sent to the shirt through the 32 valve. From the tank, the mass passes successively through all the zones of the machine, is tempered and is fed by an 4 screw into the pipeline, from where it is sent to the molding through an 77 crane. If mass is not needed at the moment, then it returns to the receiving tank 12 through the 6 pipe.

When working on automatic tempering machines, the receiving funnel should be completely filled with chocolate mass and replenished it, maintaining a constant level of mass.

At the end of the work, the chocolate mass is drained, freeing the funnel, cylinder, return pipe and pipelines, through which the chocolate mass is pumped for molding into special units, which are a complex of technological machines connected in series with each other by a system of conveying devices.

units universal for the manufacture of chocolate products, both with filling and without it.

The tempered chocolate mass is cast into 9 and 10 casting machines into molds, which are continuously fed by the 8 chain conveyor from the 6 zone of the mold preheater located under the 7 vibrators. In the preheating zone, 90 3000 W infrared heaters are mounted, which are divided into three groups. The combination of these groups allows

Forms are hinged on the 8 chain conveyor with a length of about 200 m, they can be easily removed or put on the conveyor at the point of turning it in front of the casting machines.

In the manufacture of chocolate bars of various weights (for example, 50 and 100 g) forms for these types of products are installed on the conveyor in turn. Each of the casting machines fills the respective forms (24 forms per minute).

After the vibrators, the molds enter the cooling chamber 5. Successively passing nine branches of the cooling conveyor, the forms are lowered along its vertical section, turned over and move back towards the casting machines. In this area, under the action of vibrators, chocolate bars fall out of the forms onto the 3 plate conveyor, and the empty forms on the way to the casting machines are heated.

In the 5 cooling chamber, the chocolate forms are cooled for 19 minutes. Air circulation in the zone of more intensive cooling 12 and in the zone of acclimatization 11 is created by four 4 centrifugal fans arranged in pairs, which are turned on independently. To control the cooling mode are thermometers. Cooling chocolate bars to a temperature close to the air temperature of the workshop allows them to be wrapped without prolonged vystoyka.

Tile wrapping machines come from an 9 plate conveyor with four 1 belt feeders. Tiles laid in parallel rows on 2 conveyor plates are automatically dropped onto belt conveyors arranged in pairs on both sides of the 2 conveyor. In the case of a forced stop of one of the wrapping machines, the tiles are transferred to the backup 3 conveyor belt, from which they are manually removed.

In fig. 5.36 shows the main technological operations for the production of chocolate products with filling on universal chocolate-forming units. Forms with figured cells are fed to the casting mechanism (see fig. 5.36, a, b), then to the vibrating device and to the tipper (see fig. 5.36, c), where the filled forms are turned upside down; about 75% of the mass is poured out of the cells, and a small layer remains on the walls. Next, the forms come in a centrifugal machine, where the layer of chocolate mass is leveled and reaches the thickness 1 ... 1,7 mm.

Fig. 5.36. The main technological operations of the production of chocolates,

in - the formation of the walls of the product; g - fill the filling; e - compaction and cooling of the filling;

e - formation of the bottom and its cooling; W - sample of the product from the form.

The molds then pass through a cooling chamber. After cleaning, the molds are fed under casting mechanisms (see fig. 5.36, d) to fill the filling in the cells, the walls of which are covered with a solidified chocolate mass. At the same time, the cells are filled with the filling not up to the edges (see fig. 5.36, d), so that there is enough space for the subsequent filling of the bottom of chocolate figures.