In Fig. 5.42 shows a continuous unit SHZD for whipping pastilles and marshmallows under pressure. The formula for whipping is prepared in an 10 mixer (see Figure 5.42, a), into which all the components of the mixture are continuously fed - the apple puree from the 1 collector through the 2 permanent level pot with the 3 plunger pump, the egg protein from the 4 tank with the 5 pump and sugared sugar-agar syrup from the 6 collector with the 7 plunger pump. Sugar sand enters the mixer funnel from the 16 collector through the magnetic trap 15 and the 14 dosing device. To dispense acid and dye with essence, the tanks 8 and 9 are installed. The recipe mixer is provided with a water jacket for tempering the mixture.

The finished recipe mixture is fed from the 10 mixer to the 77 (heated) intake tank, from which the 12 gear pump is continuously fed into the rotary centrifugal mixer 13, and the air introduced from the 20 receiver is pressurized into the mixture.

For air pressure regulation, an air reducer 19 with 77 manometers is installed. The amount of incoming air is measured by a rotameter 18.

Rotary centrifugal mixer unit SHZD consists of a housing with a water jacket, whipping stationary stators and whipping rotor. The rotor 7 (see figure 5.42, b) is rigidly fixed to the horizontal shaft 2, which receives rotation from the 7 pulley. The liquid mixture and air flow respectively through the 3 and 4 nozzles into the 5 chamber, and then into the space between the 7 rotor and the two fixed 9 stators fixed to the walls of the 8 whipping chamber. On the inside of each statopa 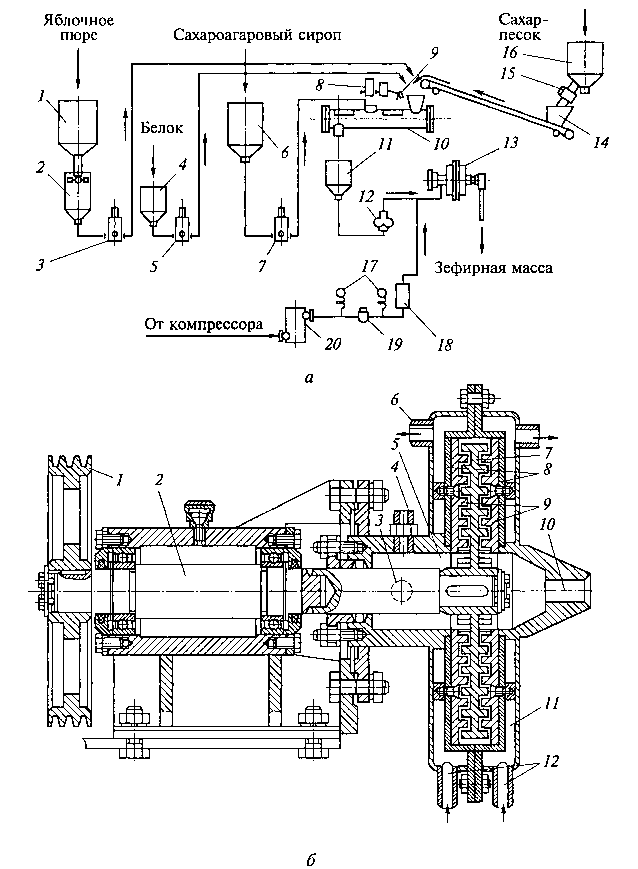 Fig. 5.42. SZD unit for continuous preparation of marshmallow mass under pressure: a - scheme of the unit; b - Rotary centrifugal mixer

The rotor and stators are made of bronze, the inner surface of the chamber is made of stainless steel. The air-saturated mixture exits through the 10 bore. At the outlet of the whipping chamber a pressure regulator is installed, which maintains a constant overpressure 0,05 ... 0,009 MPa in it.

To regulate and stabilize the temperature of the mixture, the 5 whipping chamber is equipped with an 11 water jacket, consisting of two sections, each of which has correspondingly 12 connections for inlet and 6 connections for water drainage. Capacity of rotary centrifugal mixer 75 ... 600 kg / h, depending on the purpose of the mixer, the rotor speed varies within 280 ... .700 min-1

The zephyrodrytic plant (fig. 5.43) is designed for molding marshmallow halves by depositing on the surface of trays.

The machine consists of the following assembly units (see Figure 5.43,

The chain conveyor is two parallel "infinite" circuits with a pitch equal to 35 mm. To fix the position of the trays on the chain, links with stops are provided. When the marshmallow is deposited on the tray, the conveyor moves evenly. At the time of passing the joints of two trays under the dentic tips of the dosing and jigging mechanism, the conveyor gets accelerated motion.

The machine is driven by an electric motor through a V-belt drive and a speed variator.

The hopper is made of aluminum sheets. For heating zephyr mass during the jigging process, the hopper is provided with a water jacket. The temperature of the mass is controlled by the thermometer 4.

At the bottom of the hopper on bolts is attached

the dosing mechanism (see figure 5.43, b), which is equipped with a spool box 7 and a spool 6. The latter is a hollow cylinder, divided by partitions into six chambers with equally disposed cutouts. The zolotnik performs an alternating rotary motion at an angle of 90 ° under the influence of the slotted cam 11 through the lever system.

Six 8 plungers are attached to the common traverse, which is reciprocated by the 10 slotted cam through the leverage system. With the 9 rocker mechanism, the stroke of the 8 plungers can be infinitely adjusted and thus provide a predetermined dosage of the weight portion deposited on the tray. When the plungers come out of the spool box, their surface is wetted with vegetable oil to prevent sticking of the marshmallow mass.

Six flexible corrugated hoses 5 connect the outlets of the spool box with the jagged tips 3. Movable carriage 4, carrying a frame with fixed denticulate tips, performs reciprocating motion along the conveyor and across it under the action of the end 1 and cylindrical 2 cams through the lever system with a spring.

Filled into the hopper marshmallow mass at that position of the spools, when the spool box windows communicate with the bunker, when the plungers move, they are sucked into the dosing cylinders. After the plungers retreat to the extreme rear position, the spool turns to 90 ° and thus connects the metering cylinders to the outlet windows of the spool box. The plungers, moving forward, squeeze out the marshmallow mass from the metering cylinders sequentially through the outlet windows of the spool box and then through the flexible hoses and the jagged tips to the tray moving along the conveyor. At the same time, the movable carriage with fixed denticulate tips makes a complex longitudinal-transverse movement, due to which each deposited portion of the marshmallow mass acquires a round form of marshmallow with a corrugated surface ("shell").

At the end of the jigging process, the direction of the speed of carriage movement sharply changes to the opposite, which is achieved by squeezing the spiral springs attached to the movable carriage to detach the ceded marshmallow mass from the tips.

where m is the number of metering plungers (m = 6); n - number of jiggings per minute; d - calculated mass of half marshmallow, kg; c is a coefficient that takes into account the breaks in the jig.

The pastyl is formulated as follows. The ready-made paste mass from the whipping unit fills the filling head hopper, which causes the mass to be applied uniformly onto the oilcloth tape covering the carrier steel tape. To eliminate the spreading of the mass, two limiting conveyors are installed at the edges of the tape. The steel tape is continuously cooled with water.

When passing through the chambers with a forced air current, the continuous pasty layer completely stops and then goes to the inclined conveyor belt.

The long-standing pasty layer is then fed into the cutting machine, where the circular knives cut it into six longitudinal strips.

Strengthened on an endless chain knives cut the stripes across into individual lozenges, which fit on the sieve.

Filled with billets of pastes, sieves are laid on trolleys which, through a traction chain mounted in the floor, pass through a tunnel dryer. After drying, the paste is fed to the conveyor of the dusting machine, and then transferred to the packaging.

After molding, moisture is removed from the pastille and marshmallow. The most common way to remove moisture is drying. In the drying process, heat is applied to the dried article, under the influence of which moisture evaporates from the surface of the product. To remove evaporated moisture, air or superheated steam is used as drying agents. Drying agents, giving heat to the evaporation of moisture, are cooled. In doing so, they are moistened and carry moisture out of the dryer.

As a result of evaporation of moisture from the surface of the product at various points, a difference in moisture concentrations (moisture gradient) is created, under which moisture moves (migrates) from the center of the product to its peripheral layers washed with a drying agent.

Thus, drying consists of three processes: movement of moisture inside the dried product from the center to the surface; vaporization and movement of steam from the surface of the product to the drying agent

As a drying agent for food, warm air is usually used.

In small enterprises drying of pastilles and marshmallows is carried out in chamber dryers of a dead-end type, and at the enterprises of high power - in tunnel conveyor dryers.

Each section of the dryer has independent air-heater units mounted on the upper floor. The plants consist of two plate heaters and one axial fan, creating in the chamber transverse flows of hot air with alternating directions. To achieve uniform drying of the products, the diffusers are provided with air guides, which ensure a uniform flow.

Trolleys with products installed in the dryer chamber are exposed to the transverse flows of hot air coming from the air-heater units. Passing through the gaps between the grills, hot air takes away moisture from the products and the same fan is withdrawn for reuse with a partial addition of fresh air to it. As the trolleys move along the tunnel, the direction of the air flow changes, which ensures a more even drying of the products.

Trolleys move along the tunnel by a chain conveyor, making periodic movement. The chain is fixed pusher-pusher trolley, which move along the track. To return the freed trolleys to the place of loading of products outside the chamber, another railroad with a traction chain is laid.

Turning trolleys in the areas of their loading and unloading is done with the help of rotary wheels, mounted on the floor.

where q - weight of finished products on a single trolley, kg; L is the length of the drying chamber, we; g - number of drying chambers; с - coefficient that takes into account recyclable waste; t - drying time of the pastille, h; / - step of installation of trolleys, mm.

Currently, the shaft dryer A2-XLUMX / 4 has been developed for drying products placed in trays.