Dissutory used in the confectionary industry to dissolve the sugar, cooking syrup, invert syrup, for the dissolution of the return of waste and so on. n.

Dissutory are metal cylindrical or rectangular containers with bubblers and coils.

In fig. 3 shows a cylindrical dissator. It consists of 11 steel shell, 12 inclined or spherical bottom, 9 manhole for loading sugar and water supply, 8 steam pipe with a bubbler, 7 coil for heating the mixture, 6 lid, 5 pipeline for supplying syrup or invert syrup, 4 pipe for recycling couple. The outer surface is covered with 10 insulation. The ready-made syrup is discharged through the 3 nozzle, the condensate is discharged through the 1 nozzle to the 2 steam trap.

The sizes of dissutators may vary depending on the amount of syrup required. 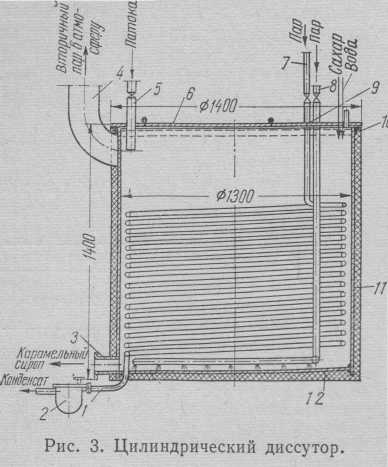 In addition to the above-noted drawbacks of the heat treatment of the product by bubbling steam into it, the drawbacks of dissators are the low quality of the syrup produced, the frequency of the process, the use of manual labor.

Spherical vacuum apparatus. These devices are designed primarily for boiling various fillings; they are also used for the preparation of candy, toffee, marmalade and other confectionery masses. In order to reduce the boiling point of the masses, the process in these apparatuses is carried out under vacuum, which contributes to an improvement in quality compared to boiling the masses in open cooking vessels at atmospheric pressure.

Spherical vacuum apparatuses come with a mechanical stirrer and without agitator; their structure is similar. The most common devices with a stirrer.

The 31-A spherical vacuum apparatus with a capacity of 150 l with a mechanical stirrer (fig. 4) is a stationary two-double digester, inside which is installed a two-blade horizontal stirrer 18. The boiler has a copper bowl 17 with flanged flange. The bowl is placed in a steel steam jacket 16, on which on the right side there is a steam supply pipe 15 with a valve, a pressure gauge 14 and a safety valve. On the other side of the steam jacket, an 1 air valve for purging the vapor space and an 21 socket for draining the condensate and connecting the steam trap are provided.

The copper cap 6, on which the 11 vacuum gauge, the 7 thermometer and the air valve are attached, are attached to the boiler cup by means of a flange connection with a gasket and hinged bolts.

To monitor the process, there are two viewing windows 12. The cap ends with a 10 pipe. A bump stop is provided inside the cap before entering the pipe to prevent the mass from being carried off into the vacuum line. The 10 piping is connected to the 8 pipe using the 9 union nut, which connects the device to the mixing condenser of a wet / air vacuum pump. 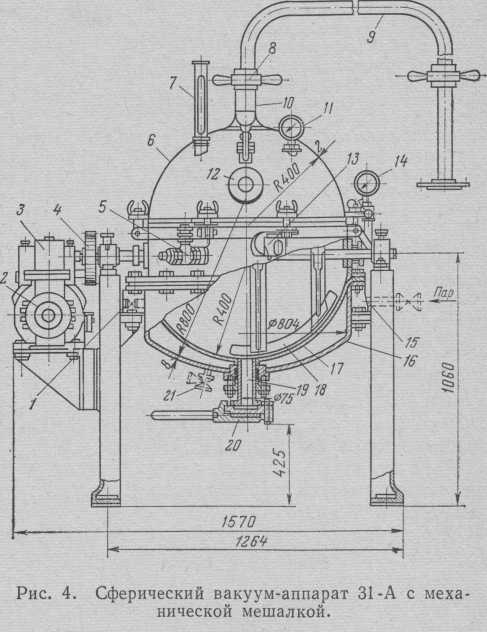 A booster crane 5 is provided for loading the machine with a welded mass; for unloading, an 19 bleeder with an 20 valve \ for sampling is used with an 13 crane. The 18 agitator is driven by an 2 motor through a 3 worm gear and a pair of 4 gears.

When loading, the suction flexible hose is connected at one end to the 5 loading crane, the other is placed in a container with a mass intended for boiling. Then open the valve 5 and. include a vacuum pump; under the influence of rarefaction the mass is sucked into the apparatus; while watching the boot process through the 12 viewing windows.

After loading the machine, remove the hose, close the 5 loading valve, turn on the stirrer, open the purge valves, the bypass valve at the condensate drain, and the valves supplying heating steam to the vapor space and the cooling water to the mixing condenser of the vacuum pump (not shown in the figure, see description vacuum pumps, page 30). After the air and condensate are removed from the vapor space and piping, the purge valves are closed, the steam trap is turned on and the heating steam is supplied.

After the end of boiling down, the steam and cooling water supply to the condenser is stopped, the vacuum pump and the mixer are turned off, the air valve with a funnel is installed in the upper part of the 6 hood, and the 20 valve is used to unload the boiled mass.

The consumption of heating steam for boiling the product in a spherical vacuum apparatus of periodic action is determined by the formulas (1-23) and (1-24).

The heating surface area of ​​the apparatus is determined in the same way as for a double-sided digester.

Electric motor power, the need to drive the stirrer of a spherical vacuum apparatus can be calculated using the formula (in kW)

where N1 - power required for rotation of a rectangular mixer blade, kW;

N2 - the power spent on the rotation of the radial blade of the agitator, rotating at the spherical bottom, kW;

ƞ— KPD gears of the drive of the mixer.

The power expended to drive a rectangular blade mixers, determined by the formula (in kW)

where K is the coefficient of resistance of the medium, depending on the density and viscosity of the mass (for example, for sugar solutions K≈2000);

z is the number of blades of the stirrer;

h is the height of the blade, m;

ω - angular velocity of rotation of the blades, rad / s (

R is the radius of the largest circle described by the blade, m;

r — radius of the smallest circle described by a blade, m;

The power expended to drive the radial agitator blades, can be defined by the formula (in kW)

where ρ is the density of the weld mass, kg / m X NUMX;

α1 and α2 — respectively, the smallest and largest angles of the radial blade of the mixer with respect to the vertical axis of the apparatus, deg. 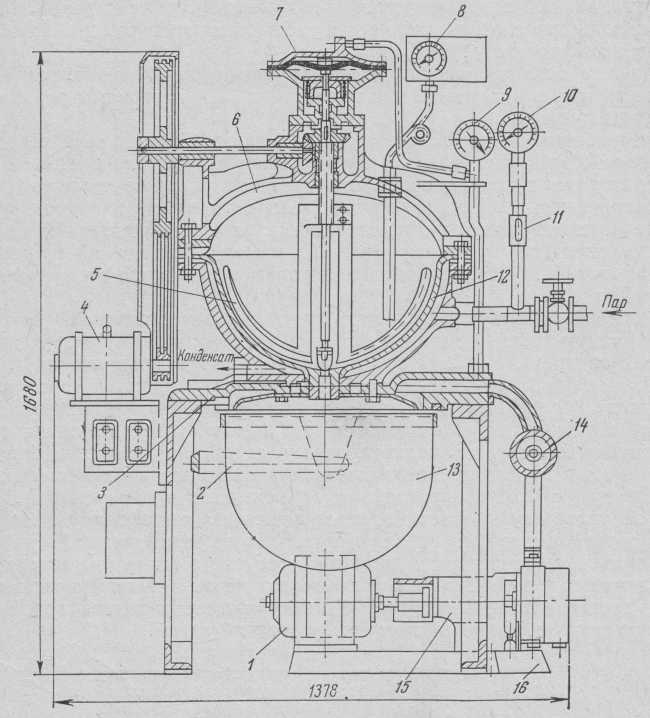 Universal unit (. Figure 5) consists of two boilers: upper and lower receiver 12 13, one above the other.

The upper double-boiler is used to boil the mass (at atmospheric pressure) and is a hemispherical copper bowl enclosed in a cast-iron steam jacket, into which heating steam is supplied.

The mass in the bowl during the “cooking” is mixed with an anchor stirrer 5, which is driven by an electric motor 4. The bowl of the upper boiler is closed with a 6 lid with a receiving funnel and fittings for loading and for withdrawing secondary steam. Through the fitting at the bottom of the bowl, the boiled mass is released into the lower boiler. The opening of this nipple is opened by means of a vertical stem connected to the pneumatic valve 7.

Before draining the mass of the lower boiler 13 3 pressed to cover the bottom of the boiler by means of a foot pedal. Lower receiving boiler is a copper vessel with a hemispherical bottom. Trunnions this boiler are freely rotatable in the sockets fork 2, which is located on the axis fixed on the left front of the frame.

At the end of the cooking process with 2 13 plug cauldron turn around and lower the boiler output from under the lid 3 for unloading. In 3 the lid has two viewing windows for monitoring the process of lowering the mass from the top of the boiler.

The rotary wet-air vacuum pump 15, pumping an air-water mixture through the 14 condenser, creates a vacuum in the lower 13 boiler and in the 7 pneumatic valve that opens the mass outlet to the lower 13 boiler. At the same time, due to the rarefaction, the mass transfer to the boiler is accelerated and the process of intensive self-evaporation takes place, leading to additional removal of moisture from the mass sucked from the upper to the lower boiler. Due to the self-evaporation of moisture, the temperature of the mass is significantly reduced.

A small-sized, wet-air water-ring 15 vacuum pump built into the device is mounted on a separate 16 plate mounted on the racks of the device and driven by an 1 electric motor.

The 14 condenser is a pipe connected to the pump's 3 cap at one end and the other end to the pump. Inside the condenser, cold water flows through a tube with holes, which comes out in thin streams and creates a water curtain, condensing the secondary steam.

Components of the mixture or a pre-cooked mixture of boiling mass are loaded into the upper boiler, including steam and a stirrer. The temperature of the mass is monitored by a contact gauge thermometer 8, the thermocylinder of which is immersed in the mass to be boiled. As soon as its temperature reaches the required value, the mass discharge valve into the lower boiler automatically turns on, the motor of the rotary vacuum pump is turned off and the water supply to the condenser is turned off, and the boiled mass is unloaded.

Vehicle MT-250 (Fig. 6), as well as the machine MTM-100, is a cylindrical container with 3 2 jacketed for steam heating and combined within the mixer. 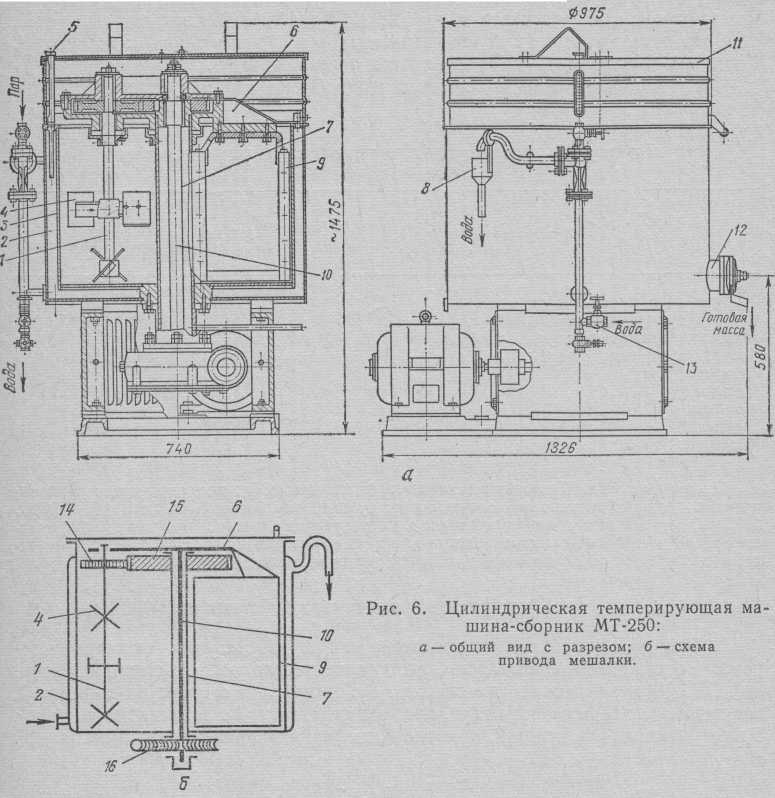 The machine is loaded with mass by pump or manually through the top folding cover of 11. A steam / water mixture is supplied to the 2 jacket for heating the tempered mass or cooling water. Water is pumped into the 2 shirt through the bottom valve before it is drained through the 8 funnel. If it is necessary to heat the mass after filling the cylinder liner with water, the 13 bottom valve closes and the upper steam supply valve opens. Steam is supplied through the tee nozzle into the lower part of the cylinder’s jacket, thereby heating and circulation at the same time, which promotes uniform heating of the water throughout the process of mass tempering.

In order for the mass to have a uniform temperature and not stratify, the machine is equipped with a planetary combined mixer. The vertical shaft 10 receives rotation from the electric motor through the worm gear 16. At the upper end of the shaft is fixed carrier 6. One end of it carries the 9 frame agitator, and the other end is the 1 shaft of the planetary agitator. This shaft has an 14 gear that meshes with a fixed 15 wheel.

on top of the 7 tubular stand, and 4 paddle agitator. When the 6 carrier rotates, the 1 planetary agitator shaft rotates around the 10 shaft and, in addition, due to the 14 wheel rolling on the stationary 15 wheel, it rotates around its own axis. In this way, the planetary mixer continuously mixes the whole section; masses, creating circulation inside the cylinder. The release of tempered] mass is carried out through the 12 nozzle, equipped with a shutter.

The water coming out of the cylinder jacket is discharged into the drain funnel 8 5 temperature is monitored by a thermometer.

After warming up the machine heat transfer mode becomes permanent

Note. The technical characteristics of imported cylindrical tempering collection machines of similar design, but of greater capacity (500, 1000, 2000 l), as well as automatic tempering machines, used mainly in chocolate production for tempering chocolate masses, are given in Chapter IV "Equipment for the production of chocolate ".