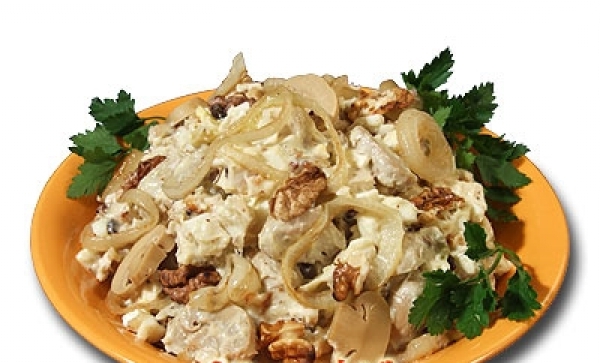 Humanity knows about 100 kinds of edible mushrooms, but they generally use only the most precious: white (fresh and dry), Krasnoholovets and grandmother (fresh) volnushki, chanterelles, mushrooms and mushrooms (for salting), russule.
Marinating fungi spread only in the XX century, although vinegar has been known to us for ages. The reason probably is that mushrooms are used mostly just for a snack, and dried and salted with much wider culinary use, soups, main dishes, cakes and more.
Mushrooms have a low calorie content, they contain little fat and carbohydrates. Unlike other plant products in fungi from 15 76% for solids are nitrogenous substances, not hydrocarbons. Carbohydrate some of them also unusual: in other plant cell walls mainly consist of cellulose and napivklitkovyny, the fungi also contain chitin and chitinous substances that are not subjected to the action of digestive enzymes.
Peculiar as digestible carbohydrates mushrooms. They include trehaleza - sugar that is not found in other plants, and

glycogen, which is usually part of the animal products. Mushrooms also interesting that contain vitamins necessary for a person that is missing or vegetables contained in them in very small quantities, such as: V V2, V6, D, H, nicotinic and pantothenic acids.
Special originality of dishes with mushrooms give their flavor and aroma. The taste is caused by a high content of extractives: nitrogenous compounds (amino acids, nitrogenous bases, and so on. F.), Carbohydrates and minerals.
The nutritional value of mushrooms depends on their type, location and distribution stage. Nutrients are distributed unevenly mass fungus: the cap them more in the leg - less.
Aromatic substances contained in mushrooms, stimulates the appetite, increase the secretion of gastric juice, promote better metabolism, digestion and digestion, strengthens the nervous system. Mushrooms diversify a diet.
In the food consumed only fresh edible fungi ages. Niasvizh mushrooms consume dangerous. Mushrooms belong to the perishable products. Proteins and fats contained in them unstable,
and some time after collecting mushrooms in body tissues arise deep process of decomposition.

Before cooking mushrooms should be carefully boil. To avoid the risk of getting eaten poisonous mushrooms during inspection must first pay special attention to their appearance. All unknown, suspicious, wormy mushrooms very old and need to throw for even one unsuitable fungus may cause serious poisoning.
Poisonous mushrooms can be defined not only by their appearance, but in the following ways: a silver spoon, dropped in broth with poisonous mushrooms, covered with brown patina; onions, dropped into boiling broth with poisonous mushrooms, blackens, salt poured on the cut toxic fungus becomes yellow coloring; to cut toxic fungus is released white juice, pulp and bluish fungus blackens quickly.
After inspecting and sorting the mushrooms must be subjected to cold working: they obchyschayut adhering to leaves, pine needles and soil contaminated remove the lower part of legs and damaged areas, carefully washed with cold water (except for drying and butter). We must observe strict rules: mushrooms collected or purchased on the market, it should be immediately subjected to primary processing. Keep raw mushrooms can not.
Mushrooms and Krasnoholovets washed in water, adding vinegar or citric acid. For culinary use mushrooms sorted into small, medium and large. Small mushrooms with legs and medium caps tend to use whole; large cap mushrooms cut.
To while processing mushrooms not blackened, their cleaning as immersed in a pan of cold, slightly salted water to which you can add a little vinegar.
After the Cold mushrooms subjected to heat treatment in unsalted water. White Mushroom and two to three times oshparyuyut boiling water. All other tubular plate and mushrooms should boil over 5-7 minutes. After that mushrooms can be cooked various dishes.
Another strict rule: mushrooms should prepare only one type alone.
Dried mushrooms are washed several times with warm water and soak in cold water (in grams mushrooms 100 700 ml of water) for swelling (6-12 hours), while they do not razmoknet and become like fresh raw mushrooms. Then carefully poured the water into another bowl and wash the mushrooms. Dried mushrooms cook over 60 minutes without salt in the water in which they nabuhaly. If you plan to cook, you have to wash them on the eve of the evening, as indicated above, and put the milk in the morning chop and fry.
Using salted or pickled mushrooms are drained pickle (marinade) and remove the spices. Too much salt or vinegar remove by washing in cold boiled water.
After the initial heat treatment mushrooms cut into strips, cubes, slices, slices or cubes. All those delicious mushrooms dishes, the smaller their sliced.
Remember that dish of mushrooms cooked in enamel, aluminum or stainless steel container. Mushrooms do not need long to expose the heat treatment, for thus deteriorating the digestibility of food disappears flavor. Optimal cooking time and cooking mushrooms - not more than 30-60 minutes.