Baked cake mix determines the group and cakes, and is the basis of their classification and one of the main semi-finished products.
Baked semi-finished products are divided into: biscuit, sand, puff, almond-nut, custard and wafer.
In turn, the quality indicators of these semi-finished products, as well as the correct and effective process management, are determined by the properties of the resulting dough.
The dough for various types of cakes and pastries is divided into: knocked out (biscuit, protein-whipped), shortbread, choux, puff and semi-structured wafer. Among the various semi-finished products used for making cakes and pastries, the highest proportion is biscuit.
BISCUIT
Biscuit is a fluffy, finely porous semi-finished product with a soft elastic crumb, which is obtained by energetically knocking down egg melange with sugar, mixing the mass with flour and then baking the resulting dough.
According to its structure, biscuit dough is a highly concentrated dispersion of air in an environment consisting of egg products, sugar, flour, so the biscuit dough can be attributed to foams.
Preparation of the dough. The process of making biscuit dough is mixed and then bringing down the egg products with sugar-sand mixture to increase in Xnumx times. Next, add the flour, previously mixed with starch, and mix no more than 3 c. The short duration of kneading the whipped egg-sugar mass with flour is caused by the need to reduce gluten swelling as much as possible. A longer kneading may result in a tight, long drawn out dough, and the biscuit will be slightly porous and dense.
Biscuit dough is characterized by a large instability of the air phase. Therefore, the finished dough can not be subjected to intense mechanical stress.
For the preparation of sponge dough is also used the method of heating. In this case, the melange with sugar before churning is heated to 40 ° C with stirring in a chopper for 5 — 7 min at a low whisk frequency, and then churn the mass at a frequency of 250 — 300 rpm for 25 — 30 min and then mixed with flour and starch.
At the enterprises of the confectionery and bakery industry, as well as catering, biscuit dough is produced in chucking machines of periodic action.
In machines with vertically arranged working bodies, the whisk performs circular motion inside the pot during operation and simultaneously rotates around its axis, i.e., performs a planetary motion, thereby ensuring energetic churning and good mass saturation with air.
In horizontal knocking machines, the working body is also a whip of various configurations, mounted on the horizontal shaft of the machine. A feature of this machine is the simplicity of the design, and the disadvantage is the lack of complex movement of the sbivanny body, which causes an increase in the duration of obtaining the finished mass.
The density of the sponge dough is in direct proportion to the duration of churning.
The optimum density of the sponge dough should be within 450 — 550 kg / m3. The finished dough should be fluffy, evenly mixed, without lumps. Test moisture 36 — 38%.
At present, in some enterprises, in order to intensify the technological process, a new method of preparing biscuit dough is being used - under pressure, the advantages of which are the reduced duration of mass churning and, consequently, an increase in labor productivity. The required mass density is achieved in a shorter time due to the forced saturation of the mixture with air. For the implementation of this process are used beaters of periodic action brand HVA.
The machine works as follows. Through the top hatch of the machine, melange and sugar are loaded, which are knocked down after the air is supplied from the compressor under pressure. Then flour is added to the mass and the mixture is kneaded without pressure. A special cart is installed under the lower fitting, and the finished biscuit dough under pressure after the secondary air supply is unloaded from the tank. The pressure inside the whisk chamber is maintained around 0,15 MPa, the duration of the mass knocking down of the 10 — 15 min, and mixing with the flour around 15 with.
Meanwhile, the dough prepared under pressure has a higher density (560 — 580 kg / m3).
Biscuit baked from dough prepared with an overpressure is characterized by the presence of larger and unevenly distributed air pores, which is explained by the higher percentage of large air bubbles in the dough.
The demand for cakes and pastries, which has increased in recent years, especially for products based on biscuit semi-finished products, sets the task of maximally intensifying the dough preparation process, which is possible only under conditions of continuous process management.
A new continuous method of cooking biscuit dough, consists of two stages. The first stage of the process involves continuous mixing of melange with sugar, saturating the mixture with air and churning the egg-sugar mass; the second is the kneading of the mass with flour. This method was introduced at the Moscow experimental confectionery and bakery combine "Cheryomushki" in the station for the continuous preparation of sponge cake, which is part of the flow-mechanized line of sponge-cream cakes (fig. 1).
Egg products and flour have a great influence on the quality indicators of sponge cake and baked goods.
Biscuit made from flour with a weak gluten has a compressibility 1,3 times higher and the porosity 6% more compared to the biscuit obtained from flour with an average gluten. Biscuit made from flour with a weak gluten, has the best taste - more thin-walled porosity, soft crumb.
Biscuit made from medium-gluten flour is of lower quality due to the fact that in this case the gluten of flour absorbs a relatively larger amount of water compared to flour with weak gluten, which increases its elasticity, and the biscuit has a more rigid structure. 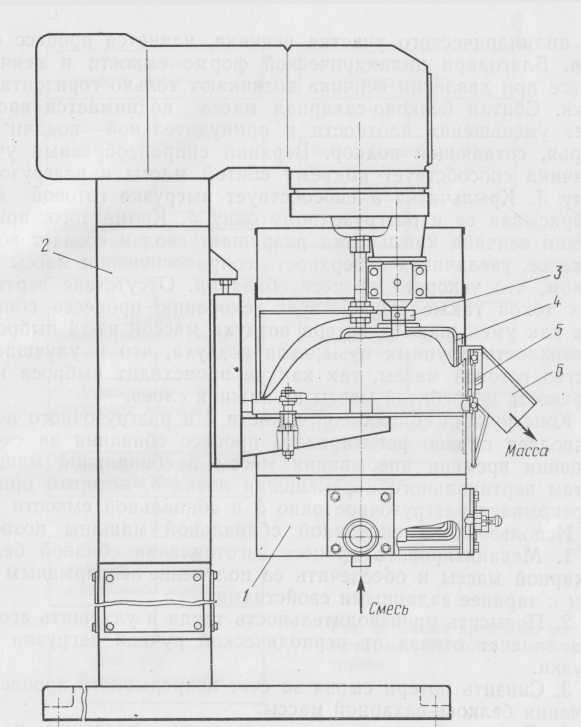 Fig. 4. Vertical whipping machine
to produce whipped flour pastry masses and obtain them with predetermined stable properties; to increase labor productivity and improve its conditions due to the rejection of periodic manual loading and unloading; reduce the loss of raw materials; to improve the quality of dough and baked semi-finished product by ensuring high final homogeneity, increasing the dispersion of the air phase and reducing the density of the test.
Designed by VNIIKP MB-60 churning machine (fig.4) works as follows.
Pre-blended components are continuously fed through the bottom to the 1 whipping tank.
The mixture, captured by the lower helical section of the cylindrical rim 4, is additionally mixed in the process of capture. This achieves maximum homogeneity of the mixture of components before churning. When the mixture rises to the cylindrical portion of the corolla, the process of churning begins. Due to the cylindrical shape of the tank and the rim in the mass, only horizontal currents arise at the pressure of the rim. Knocked protein-sugar mass rises up due to a decrease in density and the forced supply of a mixture of raw materials, creating backwater. The upper spiral portion of the corolla contributes to raising the mass of the knocked to the discharge window 5. The 3 impeller contributes to the unloading of the finished mass, throwing it to the 5 discharge window. In addition, during the movement of the corolla, the impeller destroys the arch and creates a funnel in the mass, increasing the surface of contact of the mass with air, which accelerates the process of churning. The absence of vertical currents also contributes to the acceleration of the churning process, since air losses in mass due to the emission of large air bubbles onto the surface are reduced, which improves the quality of the finished mass, since there is no release to the surface of undersized mass from the lower layers.
The construction of the 1 whipping tank and the 6 discharge chute allows you to smoothly adjust the knocking process by changing the mass dwell time in the 2 churning machine by moving the 6 chute vertically, which overlaps the 5 unloading box in the 1 dump container.
Using the described whipping machine allows you to:
The creation of a continuous-action whaler allowed the development of a station for the continuous preparation of whipped protein-sugar mass (Fig. 5).
The work of the machines and mechanisms that make up the station of continuous preparation of whipped protein-sugar mass, as follows.
One of the screw vibrating dispensers continuously delivers granulated sugar to the mixer. From the mixer, a homogeneous mass, which is a homogeneous mixture of protein and granulated sugar, is fed by a dosing pump through a nozzle into the chamber of a whipping machine. Selection knocked protein-sugar mass is in the upper part of the whipping tank through the tray. A mixer is attached to the discharge chute, into which any additional bulk component (flour, crushed nuts, etc.) can be fed.
The design of continuous vibration dampers for
bulk components provides accurate dosing order of ± (1,3 — 1,5)%.